A team of Ecuadorian scientists and researchers is working hard to determine the genetic history of the Galapagos Islands. They are comparing the “barcodes of life”, which represent the species found in the archipelago, with the global gene bank to find new species.

NEWS: Galápagos tortoises are reborn for the first time in 100 years

After more than a century, the legendary tortoises of the Galapagos Islands re-hatched in a historic event that marks a new island for the ecosystem that fascinated Charles Darwin, father of the Theory of the Evolution of Species, in the century before last. The tortoises, whose scientific name is Chelonoidis nigra, had been almost eradicated […]

Galapagos, a paradise for birdwatchers

The virginal nature of Galapagos Islands in the Pacific, seduces from a few centuries ago, because before that, they even didn’t exist. The lack of human contact for many thousands of years makes this destination a paradise of unique species. In particular, there are many extraordinary birds to discover in this Archipelago. The Galapagos Islands are […]

The most fascinating marine species of Galapagos

Galapagos islands are a paradise of biodiversity, and among this incredible fauna, there are a great variety of marine species of tropical fish and other wildlife. Galapagos fishes may not be as famous as the islands’ other animal inhabitants but they are also spectacular samples of them! Discover the most fascinating marine species of Galapagos! The […]

7 Amazing Birds in the Galapagos Islands

Although the Galapagos Islands are famous due to their wide diversity of marine and land creatures, the different birds species make travelling to the Galapagos Islands memorable. Even though each species of birds feature their exotic characteristics, there is no doubt that on top of the list you will always find the red and blue […]

5 Galapagos Species That Need our Protection

Ecuador has more biodiversity per square kilometre than any other country in the world. Galapagos Islands, located in the West coast, are extraordinary, a paradise of biodiversity. Unfortunately, some of the jewels of these wonderful islands are endangered: a great part of the fauna of Galapagos Islands need special protection. The main species of Galapagos that are in danger […]

One of the most extraordinary attractions of Galapagos Islands is a curious bird called blue-footed booby, a particular kind of booby with blue feet and a large peak. Visitors can find them nesting or feeding near the coasts in many of the islands, where they live with their relatives, the red-footed boobies. Discover more details about these funny […] 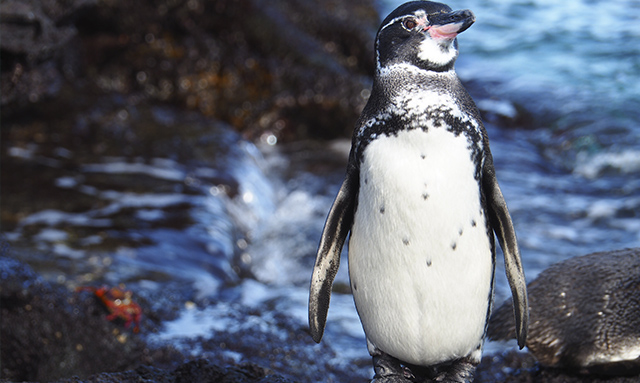 The Galapagos Penguin, a Unique Species on this Planet

The Galapagos penguin is one of the extraordinary fauna that can be found in the Enchanted Islands. The main difference between these penguins among others is that they can swim in tropical waters. At the same time, they belong to the smallest species of penguins in the world. Discover more about this fantastic animal! SPECIAL […]