The land of albatrosses

Large amount of endemic species inhabite the island such as: the Española mockingbird, the Española lava lizard, and the waved albatross, to name a few make the island one of the most specials.

The Española giant tortoise species was rescued from extinction and is now one of Galapagos’ greatest conservation success stories. Scientists and resource managers at the Charles Darwin Foundation and Galapagos National Park have released nearly 2,000 young tortoises on Española. 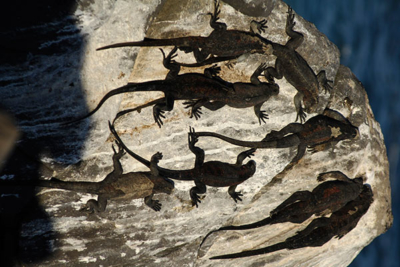 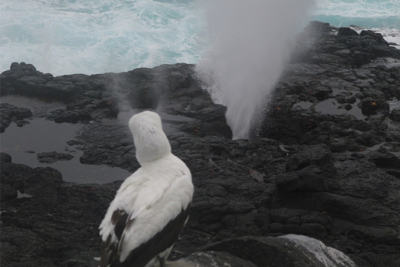 Española is probably most well-known for being the sole breeding ground for the entire population of the world’s Waved Albatrosses. Given their limited breeding range, the species was listed as vulnerable and then changed to Critically Endangered due to its decreasing population resulting from threats including fishing in waters near the mainland among others. The Waved Albatross population is currently being monitored by the Charles Darwin Foundation and the Galapagos National Park Service and activities to protect them and their habitat are underway.

Punta Suarez has an amazing variety of wildlife including the lazy sea lions at the rocky landing site, forcing visitors to surround them to get to the trail. Brightly-colored red and green marine iguanas can be found lining the coastal areas near the landing site.

The trail passes by a small beach occupied by sea lions and colorful Española Lava Lizards. It then cuts through saltbush, where Galapagos Hawks, Española Mockingbirds, Darwin’s finches, and Galapagos Doves all fly around. Visitors then come upon the impressive nesting colonies of Blue-footed and Nazca boobies. Swallow-tailed Gulls and Red-billed Tropicbirds dash in and out of the cracks in the cliffs. Continuing inland, the trail leads to a cliff overlooking the ocean where waves crash into a lava fissure, creating a blowhole that sprays water nearly 30 m into the air at high tide, making it it worth the picture.

Perhaps one of the highlights of the Galapagos Islands is found on Espanola. Nearly the entire world population of adult birds can be found between April and December. They mate and perform elaborate mating dances, that can last up to five days and may include stumbling, honking, and beak-fencing. Waved Albatross pairs produce a single egg each year and share responsibility for its incubation. Their grace in the air is sharply contrasted by their comic clumsiness on land. Lucky visitors will observe Waved Albatrosses wobble awkwardly to the cliff’s edge before launching themselves into the wind to take flight—many of them for the very first time in December!