A complete overview of Galapagos combining the amazing birdlife at Genovesa with natural history sites like Post office bay. Unique species like the waved albatross and the Red Footed boobies. Bothe north and south of the archipelago, different wildlife and different scenery, a varied expedition that will amaze the most unmovable traveler.

This day you will fly from Quito, Ecuador to the Galapagos. Due to the Galapagos Government, a fee of 20 USD must be paid for the migration control card. Afterwards, you will enjoy a quick 4 hour flight, with a quick stop at Guayaquil.

Once in Santa Cruz, passengers must go through an inspection point at the airport to make sure that no foreign plants or animals are being introduced to the archipelago. Also, this inspection point is where passengers have to pay for the entrance to the Galapagos National Park under the following parameters: Adult Passengers $100 and Children $50 (under 12 years old).

Later on, our guide will pick you up and will carry the luggage to the bus from the port, that transports the passengers, to the Catamaran Semana Journey on a motorized boat called panga.

This is an interpretation center with exuberant gardens and stunning ocean views in contrast with the 1960´s buildings in Charles Darwin Center. Visitors at the interpretation center can learn a lot about the geological and human history of the islands, conservation facts and natural history. This is the oldest museum of Natural History in Galapagos Islands that is trying to preserve the nature of the islands.

A short visit to the Galapaguera that is a good place to observe Galapagos tortoises in its natural habitat.
San Cristobal island has endemic species such as: the Mockingbird Nesomimus melanotis, lava lizard (Microlophus bivittatus), Chatham Leaf-toed Gecko (Phyllodactylus leei) and the tortoises. All of these species can be observed in this place, the beach is really big and it works as a nesting zone for marine tortoises.
Between January and May, it is common to find the footprints of the female tortoises that have climbed to the sand dunes to deposit their eggs.

Cerro Brujo is a beautiful white coral beach where you can swim and watch birds and sea lions, plus you can snorkel.
This is the first coast where Charles Darwin ever walked on in 1835. In this marvelous lava landscape, you can see seabirds like blue-footed boobies, Nazca boobies, herons, frigate birds and shore birds. The protected bay is very popular to observe young tortoises and for swimming.
The pools with salty water behind the sand dunes were used by the fishermen as a salt mine in order to preserve food for the local population.
Among the fauna, you can observe the Chatham Mockingbird and the San Cristobal Lava Lizard, both species being endemic to the island and unique to the area as they cannot be observed nowhere else.
Furthermore you can find the island canary, the Galapagos turtles and with luck the little bird known as the Pájaro Brujo in Spanish, an endemic specie from San Cristobal Island. The vegetation covers all the route where you can find species like the candelabrum cactus and carob trees.
Located on the north coast of Isla San Cristobal, here Cerro Brujo, is the place where we can find a relaxing and beautiful place to be at.

Located on the north-eastern coast of Hood, we find Gardner Bay. It provides an excellent beach for relaxing, swimming, snorkeling, kayaking, and the opportunity to observe sea lions. Here we can also observe sharks in the crystal clear ocean waters.

This area is great for spotting blue-footed boobies, albatrosses and Nazca boobies. A beautiful site on the oceanfront, the large waved albatrosses use the cliff as a launching pad. The famous attraction is the magnificent blowhole, spurting water high into the air at least from 50 to 75 meters high. This site presents wonderful photograph opportunities.

This site offers probably the best flamingo lagoon in the Galapagos; it is also one of the largest in the islands. It’s situated between two tuff lava cones that give the area a special atmosphere. There are various species of shorebirds to observe besides flamingos; the most frequent are common stilts, white-checked pintail ducks, and other migratory birds.

It is very interesting to see the two distinct beaches: “The Green Beach” (due to its high percentage of olivine crystals in the sand) and the “Flour Sand Beach” which is made up of coral.

Historically, this site is the location of a wooden barrel that was placed in the 18th century by the crew of a whaling ship. It has been used since this time by mariners and tourists as a post office. The idea is to carry letters or postcards to their destination by hand. Apart from being the Post Office Barrel, this site was the landing area for some of the first colonists.

Transfer to the Baltra airport. 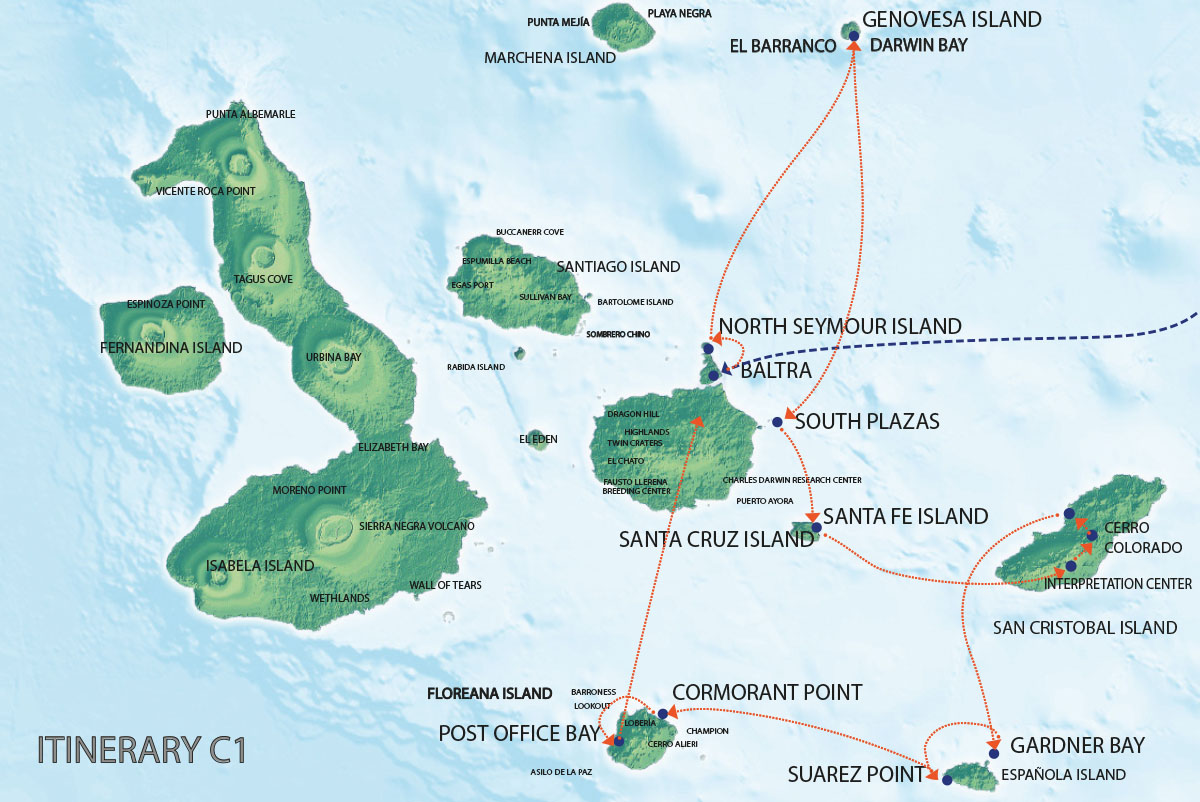 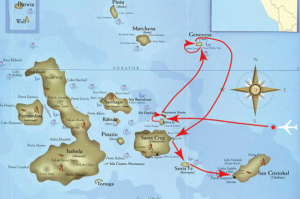 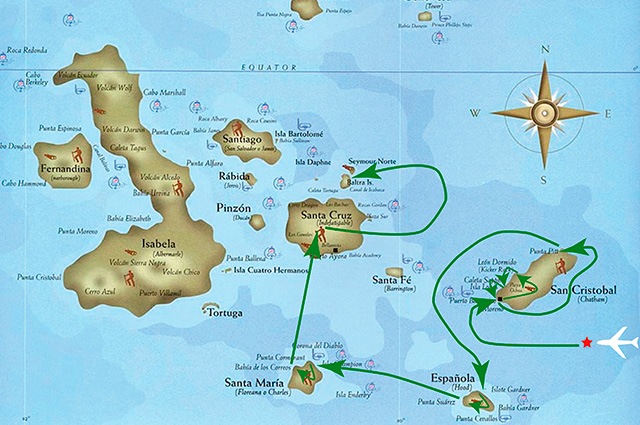 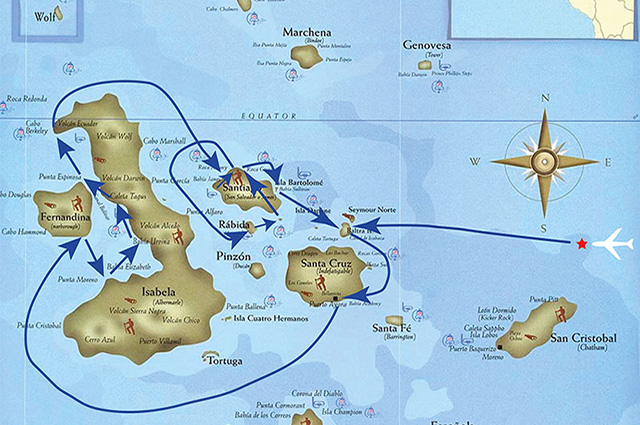 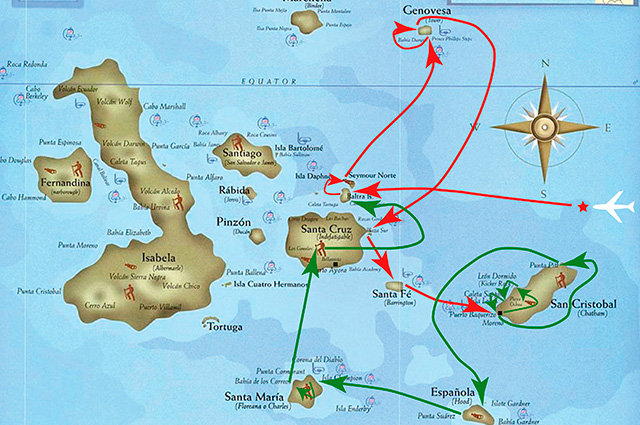 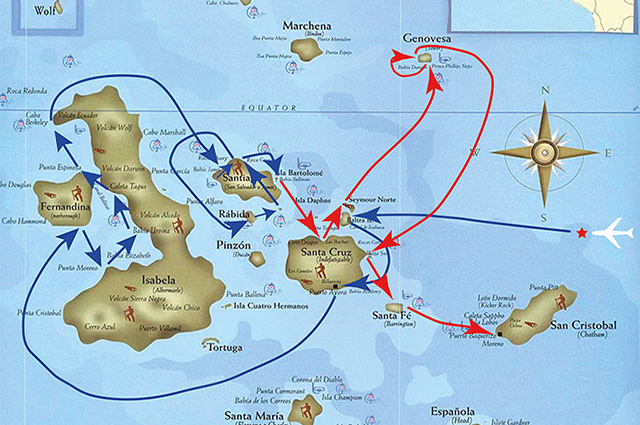 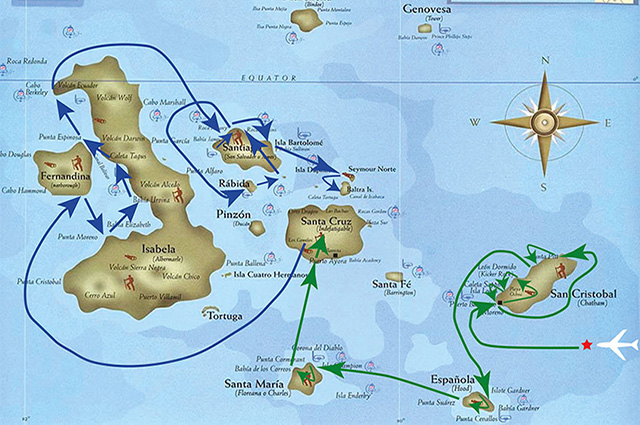 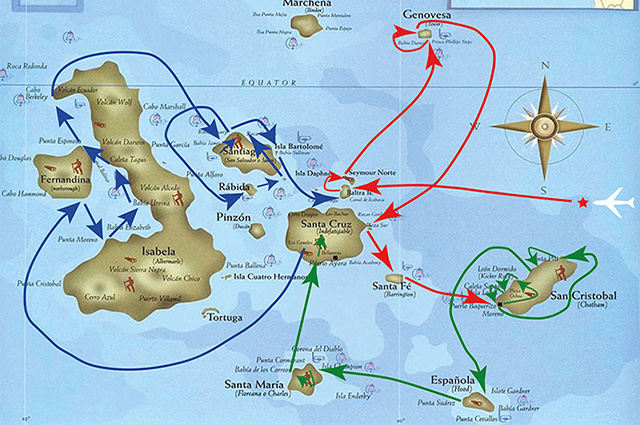 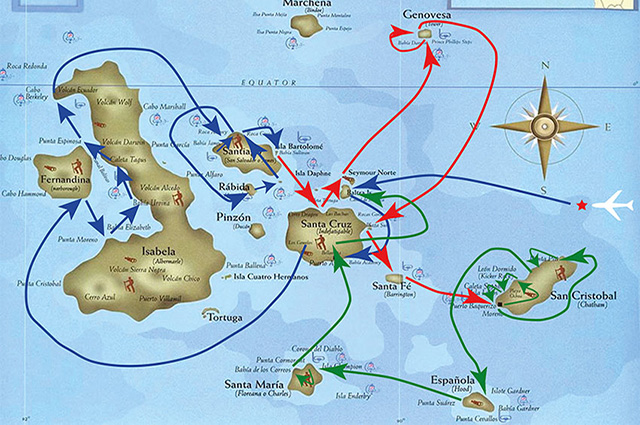 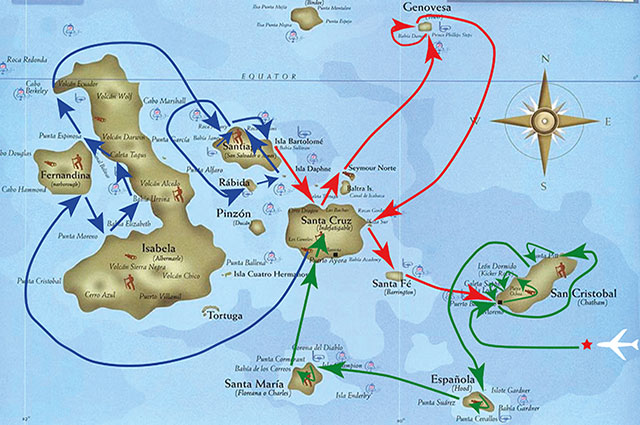