That’s a good question to ask before heading there.

Scientists are still guessing exactly why Machu Picchu, or Old Peak, was built. Here are a few theories.

It’s thought that Machu Picchu, which measures 1 square mile and rests about 2,400 meters above sea level in the midst of the Sacred Valley, was partly a royal’s retreat. The site was ordered constructed by Emperor Pachacútec Inca Yupanqui beginning in 1450 who used it as a vacation home and to entertain his royal court and special guests sometimes several weeks at a time. 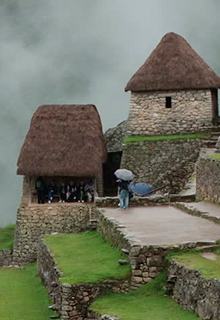 Other scientists say it has a symbolic shape of a condor and was part of a religious pilgrimage between Lake Titicaca in Bolivia and the nearby Cusco. Some human remains found at the site are genetically traced back to the Titicaca region.

It’s widely thought that the Intihuatana rock, the Sun Temple and the Three Winds Temple located in the “urban” section helped leaders mark annual celestial and seasonal patterns connected to local agriculture and the Inca religion. The city’s strategic positioning on a high plateau enabled Pachacutec and inhabitants to monitor the surrounding mountains and valleys for invaders or traitors.

The existence of this uniquely situated city in the sky, which housed between 300-1,000 people, most who staffed the premises, was made known to those inside and outside of Peru in 1911 by U.S. archaeologist, Hiram Bingham. Bingham mistook Machu Picchu for the so-called Lost City of the Inca, which we now know is Vilcabamba, a 5-day trek away, where the last Inca ruler – Atahualpa – and his soldiers lost a year long battle to Spanish invaders led by Francisco Pizarro.

Do you have more questions about the
Peru?

We are here to help you

Want more story behind the Machu Picchu ruins? An estimated 5,000 people constructed the city’s 140 buildings and nearly perfect water system over a 20 year time frame. Workers mined the massive dry stones from a nearby quarry, but exactly how they were transferred up to the mountainous site, cut and tightly fashioned together so that paper can’t fit between the granite slabs, experts still don’t know.

Another contentious element regarding the story behind Machu Picchu is whether or not Pachacútec and his royal lineage and their treasures are buried behind a mound an oddly shaped wall in the structure. A 2016 Forbes article says that georadars and other high tech devices confirmed that two entrances, a possible burial chamber, a set of stairs and large amounts of gold and silver lie behind the benign-looking bit of rubble. However, a Peruvian historian claims the mummy of Pachacútec would have been transferred to Lima by the Spaniards and buried under the San Andres hospital, but neither his remnants, nor those of other Inca rulers have been found there.

Other treasures – about 40,000 pieces – that Bingham found at Machu Picchu and took back to a Yale museum were only recently returned to the Peruvian government, most of which you can now see on display in Cusco.

If you are traveling to Machu Picchu, you can’t miss the opportunity to visit the Galapagos Islands. It is a wonderful paradise so close to Peru. If you are not sure about it, you should read the post Why should I take a combined tour Ecuador & Peru?