The well renowned Galapagos Islands offers a diversity of landscapes that are of unique envy among other exotic places that you may have visited before.

All in all, the experience of getting close enough to the bizarre nature in the Galapagos Islands can make you a more conscious human being about life itself .One of the methods to get this particular experience is by doing the island hopping along the archipelago. If you decide to engage with the Island hopping service, then the islands of Santa Cruz and Isabela offer a vast choice among many interesting spots that can get your attention according to your personal need.

Every island has its uniqueness among its highlights and landscapes that you will find on your journey in this amazing archipelago. Although each island is worth it to visit and explore its exotic nature, the record shows Isabela island is by far a destination with the highest demand among international tourists. Perhaps , this demand relies in the big colonies of Galapagos Penguins that you can find among other islands, as well as the majestic surface of its active volcanoes.

The most popular sites in Galapagos

On Santa Cruz Island, some of the highlights that can be suggested are:

It is a giant tortoise reserve located in the highlands of Santa Cruz, where tourists and visitors can come by in order to see the giant tortoise in their natural habitat and nearby the lagoon.

According to the season, you will be able to see a significant amount of tortoises. Usually, during rainy season the presences of the giant tortoise is more predominant in the area. Close by, there is a private ranch house, where the lucky owner can see everyday these famous giant tortoise, a luxury that very few people have access.

Additionally, in this place there are lava tunnels, which have been illuminated on the inside for a better appreciation of their structure to visitors and tourists. The hike in here will last 15 minutes approximately. 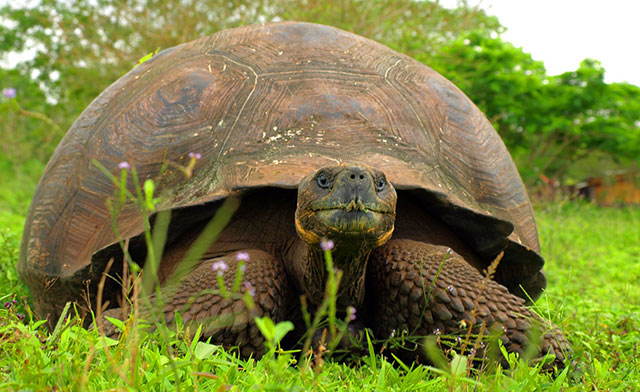 In the Charles Darwin Research Station, you can watch a variety of species of the big Galapagos Tortoise in captivity. You will also listen about the ongoing conservation efforts directed at preserving the Giant Tortoises, as well as the environment of the archipelago as a whole. Nowadays, the research station has two satellite stations named “Giant tortoise Breeding Center”, which are located in the islands of Isabela, and San Cristobal as well.

It is a well renowned beach in Puerto Ayora, island of Santa Cruz. This spot is composed of two beaches, playa Brava and playa Mansa. It is famous due to its beauty contrast of colors in a soft and sandy beach. The white of the sand, the turquoise of the ocean water, the green vegetation, and the black of the surrounding rocks will take your breath away.

Here, you walk for 45 minutes approximately, through a cactus trail on to the first beach, which is called Playa Brava, due to its strong currents. On this beach you will see a lot of marine iguanas, marine birds and pelicans. After visiting Playa Brava, we continue with an additional 15min walk in order to reach Playa Mansa. This second beach is a natural lagoon visited by blue footed boobies and pelicans. It is also a beautiful place for swimming and taking sun. 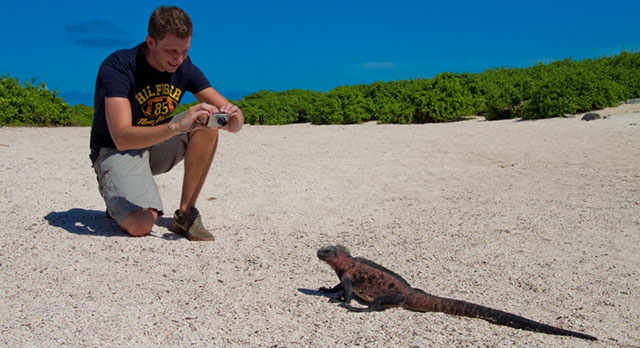 Then there is the highlands of Santa Cruz where you can see the vegetation on the landscapes that are surrounding the area and deep in the horizon, appears the Pacific Ocean. During the winter season, you can see a lot of wild tortoises all over the place and where they drink water provided by the rainy weather.

This place provides an impressive view of the archipelago. It has the most prestigious location and the best view to observe a variety of endemic plants, as well as up to 7 subspecies of finch and the vermillion flycatcher. The area is known by the characteristics of persistent drizzle (‘la garúa’) that falls horizontally throughout 8 months of the year. On the west side of the island you will watch the largest crater on Santa Cruz.

It is a wide bay with multiple sandy beaches. It is a nice area for swimming and relaxation, while you enjoy the wonderful view.

It is a spectacular place to hike, swim, and enjoy snorkeling. The main attractions are: the frigates, boobies, gulls, hawks, green sea turtles and the famous Galapagos Sharks.

It is the most attractive landscape of the archipelago. This island is undoubtedly the most photographed in all the Galapagos Islands. You can appreciate a spectacular view of two beautiful bays and observe the fascinating formations of volcanic lava cones. 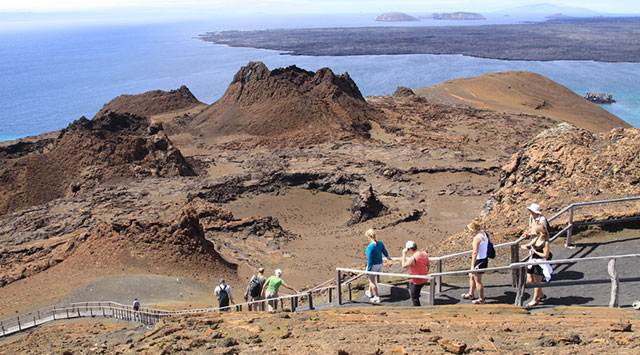 Two islands form Plazas. The turquoise waters of the channel contrast brilliantly with the white sand and black lava coast. It is a wonderful spot to observe marine life, including manta rays. Their Coasts are a perfect spot for snorkeling activity.

The Gemelos are two big sunken holes beneath the surface, and look like two volcanic craters. They show the origins on how the islands were created by the collapse of the earth beneath, which lava has passed and created giant tunnels. This event facilitated the creation of the craters. Also, in this spot there is also a tower where you can watch the vast surface of the island, along its natural wonders.

It is considered the biggest of six volcanoes located in Isabela Island, and the island itself is the youngest in its creation (about 1 Million years old) among the whole archipelago. Currently, it has 5 volcanoes, that are active, and the most recent activity was recorded in Sierra Negra in 2005, where scientists, and naturalistic guides could observe the magic scenario of molten lake of lava, which was produced by its amazing eruption.

Sierra Negra has 5 miles of hiking length that takes you into the highest point of the westerly island of Isabela. On top, the landscape looks more like a piece of art, where lot of fields covered black lava stones, converge into marvelous volcanic cones where you can watch yellow sulfide, evaporating from the surface.

As you climb to the top of the volcano, the temperature drops, considering that the highest point of crater´s peak is 1490 meters above the sea level. At this point, the clouds moves around in order to reveal the great sweep of the caldera, which size is 70 sq km, and it is considered the second largest in the world.

At this level, you can observe the island´s geography in its splendorous immensity, along the contrast of colors of soil, which range from black of the lava stones, light brown, yellow, and turquoise color, which ends at the pacific ocean shores. Then, after the summit, you can descend towards the volcano Chico. The deeper you get into this volcano, the vegetation disappear.

It is a collection of smaller cones, which are considered a flank along the Sierra Negra. In this area the landscape will change into a carmine-black wall along with the presence of volcanic ash. The surface looks like a petrified black ocean, with an aspect of ploughed field. This rough surface is known as “aa” from the Hawaiian expression for “stony with rough lava”. It´s been said that earlier explorers reported that the “aa” surface ripped the leather from the shoes. The surface in this particular area has been shaped for centuries, through a series of volcanic eruptions.

It is a famous islet located at a few miles from Puerto Villamil. The place is an iconic spot due to its famous snorkeling activities. In order to get there, you need to take a boat from the dock. The trip to the islet will last about 15 minutes, and on the way you can watch some frigates, and other birds beyond the horizon. In this marvelous spot you can witness the exclusive presence of sea lions, marine iguanas, sea big turtles, blue footed boobies, pelicans, sting rays, sharks and a colony of Galapagos Penguins. 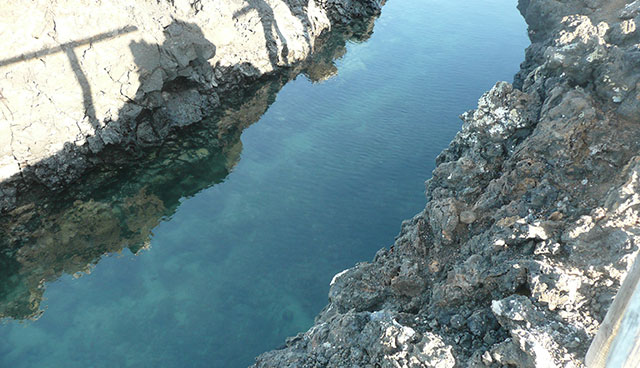 It was an old prison colony used by the Ecuadorian Government between 1946 and 1959, where the prisoners were used to construct the walls out of sharp and hard volcanic rock.

It is another spot for snorkeling and diving due to its calm, and shallow water. It is located about 60 minutes from the town of Puerto Villamil in Isabela, and the most attractive activity are the unique geologic formations in the ocean. Some of these geologic formation are in the shape of arches and tunnels where you are going to find the presence of many marine creatures that give harmony and enchantment to this place.

It is a small beach formed by coarse grained sand from shells that end in the shallow inter-tidal lagoon located at the south side of the island. This place is ideal for a relaxing swim, particularly families with children. As you can see, there are many places and landscapes that can make your priority list by the time you will arrive into the archipelago. Just make sure what kind of outdoor activity you like most, and whether is on the surface or in the sea. For the elaboration of itineraries and connections in order to get to your favorite spot, Latin trails is more than ready to give you some advice and assessment on your next travel plan. Feel secure with us, and enjoy your future in Ecuador and the Galapagos. We will take care of the details to make sure you feel extremely good, and things will go smoothly. 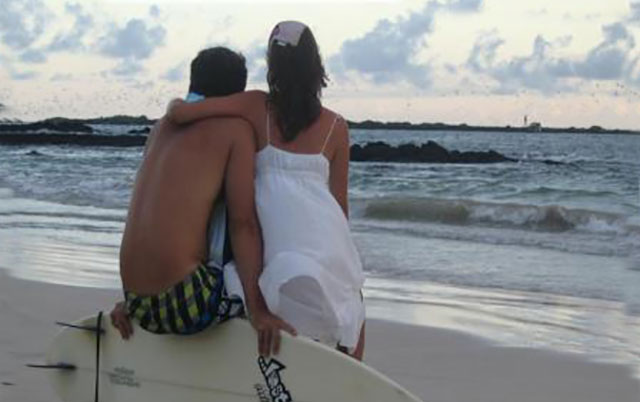