This is a complete journey where you will experience the best of the archipelago. During this 8-days cruise, Galapagos’ diversity won’t be doubted. Colors, animals, sceneries; everything looks surreal, very different one from another, but at the same time, harmoniously and perfectly combined in the most unique place of the world.

This day you will fly from Quito, Ecuador to the Galapagos. Due to the Galapagos Government, a fee of 20 USD must be paid for the migration control card. Afterwards, you will enjoy a quick 4 hour flight, with a quick stop at Guayaquil.
Once in Santa Cruz, passengers must go through an inspection point at the airport to make sure that no foreign plants or animals are being introduced to the archipelago. Also, this inspection point is where passengers have to pay for the entrance to the Galapagos National Park under the following parameters: Adult Passengers $100 and Children $50 (under 12 years old)
Our guide will pick you up and carry your luggage to the bus that transports the tourists to the ferries to cross the Itabaca Channel. After this, passengers will be taken by another bus to the first visit to Ranch Manzanillo where visitors must wear comfortable walking shoes, light clothing and a waterproof jacket, sun-block lotion, a camera and repellent for the first activity. The visit to Ranch Manzanillo includes a picnic lunch and a short walk before boarding the Motor Catamaran. It is important to follow these instructions in order to accomplish this itinerary properly. Please be aware that passenger´s luggage will be sent directly to the Seaman Journey yacht.

Journeying across Santa Cruz into the highlands visitors are delighted by the island’s variety of life and geology. Beginning at the coast and traveling across Santa Cruz the road departs from Puerto Ayora climbing through the agricultural lands and into the mist covered forests. Santa Cruz possesses all of the various life zones present in the archipelago. Birds will surround you across this path. Whether it’s the bright red feathers of a vermillion flycatcher or one of Darwin’s Finch almost every bird present in the islands can be found here.
Santa Cruz offers excellent opportunities to observe the wild Galapagos Tortoises. Tracking tortoises is not the only exciting activity to be found in the highlands. There are also plenty of lava tubes, sinkholes and craters ready to be explored. After this visit they moved to the M / C Seaman Journey.
-/-/D

Punta Moreno is located on the north coast of Isabela Island between the volcano Sierra Negra and Cerro Azul volcano. The trail runs along a lava flow Pahohoe (solidified lava in the form of corrugated or an accordion) into a complex of coastal lagoons, where several species of birds which can be found around this lakes and mangroves

In Bahia Urbina you can see Darwin’s finches. Its main attraction is the land iguanas, which are larger than in places like South Plaza Island and Galapagos tortoises also in the wild, sometimes even out of season they are on the bottom of the islands.
A large amount of vegetation can be observed such as chamomile and Rosewood, but among all these plants, the beautiful flowers of cotton Darwin, endemic to the Galapagos Islands stand out.

Tagus Cove is located west of Darwin Volcano on Isabela Island. This was a favorite spot for pirates and whalers, and it was them who started the following tradition: the inscription of the names of boats. At the beginning of the trail, you will see a small cave where you will find inscriptions dating to the 1800s.
Its name originated from a British warship that went across the islands in 1814 looking for Galapagos Tortoise for food.
Due to former eruptions, the substrate has a large amount of volcanic rocks of different sizes, among the most common are little balls of nearly spherical shape known as the “lapilli” or petrified rain.

One of the most impressive and spectacular places of the enchanted Galapagos Islands; with high cliffs and tuffstone, ash and lava formations give this area a majestic touch, is Punta Vicente Roca. It is located in the north-western coast of the island; comprises two distinct islets. This large bay has a spectacular marine life.
Here, you can see seahorses, sea turtles and the strange yet fascinating Mola-mola or sunfish. This bay is a great place to practice Panga Ride and Snorkeling.

Espumilla  beach  is  located  on the  northern coast of  Santiago Island in James Bay. During the last presence of the El Niño phenomenon, one of the two lagoons in this site, underwent a process of sedimentation, thus causing the disappearance of a representative colony of flamingos. The main attractions are the palosanto forest and the nesting of baby turtles.

It’s black beach is located on the west side of the island and is the main attraction of the island. Their volcanic tuff deposits have favored the formation of this special black sand beach.
This site is called Puerto Egas, because there was an attempt to start the exploitation of salt, which failed because the price of salt in the continent was very cheap, and did not justify its exploitation in Galapagos. The project was abandoned and the infrastructure was left abandoned.

Rabida Island is unique due to the red color that colours all rocks and sand. The volcanic material in this island is very porous and external factors as rain, salty water, and sea breeze have acted as an oxidizing agent.
A short walk along a trail leads you to a coastal lagoon behind the beach which permits you to observe the land birds such as finches, doves, yellow warblers, and mockingbirds. At the lagoon there is a colony of flamingos.

This is a small islet (1 sq km) located just off the southeastern tip of Santiago Island. It is a recent volcanic cone, shaped like a Chinese hat when seen from the north. On the west you can see lava formations, formed under the sea and raised upwards, this is why coral heads are found on the lava. This is an excellent visit for interpretation of geological features such as lava tubes and lava flows. The landscape is covered by sea lions colonies, marine iguanas, and Galapagos penguins.

Santiago, also called James, or San Salvador Island, is located in the west central part of the Galapagos archipelago. It is the fourth largest island in the archipelago (following Isabela, Fernandina and Santa Cruz). Along with some of the large western volcanoes of Isabela and Fernandina, Santiago is also volcanically active, with many young flows and cones to be seen, particularly along the south, west, and east coasts. These may even be seen from the summit of Darwin Volcano and from space. A number of historic eruptions have been
reported over the last 2 centuries. Santiago actually consists of two coalesced volcanoes: a typical shield volcano on the northwest end and a low, linear fissure volcano on the southeast end.

Bartolome Island is situated across Sullivan Bay. It has an altitude of 114 meters , from where we can observe one of the most beautiful sceneries of the Galapagos Islands such as: Volcanic cones, lunar – like craters, lava fields, and the famous Toba formed pinnacle eroded by the sea. There is very little vegetation on this island. It has two breathtaking beaches where marine turtles exist and at the base of the pinnacle, as well as a very small colony of Galapagos penguins.

These two small beaches are found to the West of Turtle Cove. Their sand is made of decomposed coral, which makes it white and soft, making it a favorite nesting site for sea turtles. Behind one of the beaches there is a small brackish water lagoon, where it is occasionally possible to observe flamingos and other coastal birds, such as black-necked stilts and whimbrels. The other beach is longer, but it has two old barges that were abandoned during the Second World War, when the USA used Baltra Island as a strategically point to protect the Panama Channel. 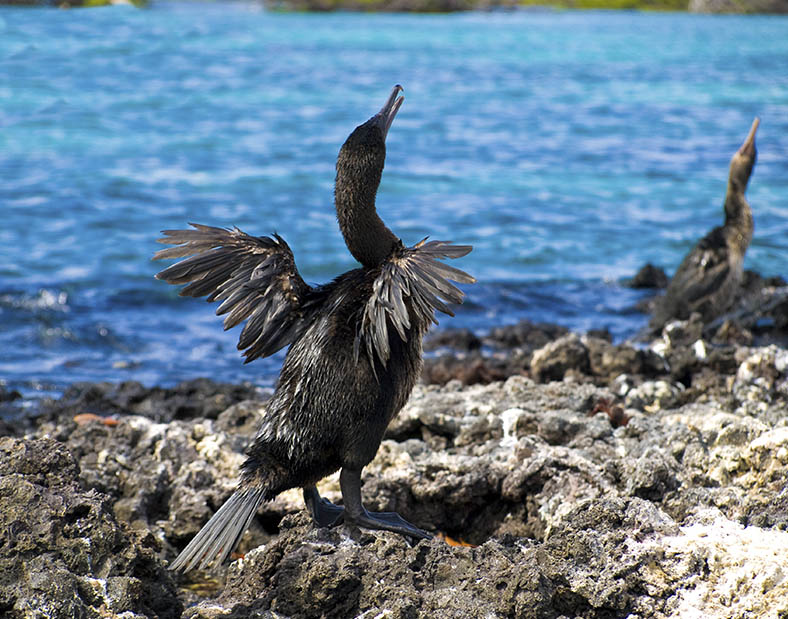