A 5 night / 6 day Galapagos cruise that visits the Southern islands of the archipelago. The liveaboard for this rout is a catamaran the M/C Petrel, a beautiful 16 guest boat in the luxury category

Upon arrival to the airport in Baltra you will be greeted by our staff and taken directly to the boat. Once aboard you will be briefed by the guide on everything you will need to know about living aboard and then you will prepare to visit Los Gemelos (The Twin Craters). Dress appropriately with sturdy shoes, comfortable clothing for a hike, and of course anything else you’d like to bring along like cameras, walking sticks, etc.

Today Santa Cruz is one of the most popular tourist sites. With a population of about 12,000 Galapagos natives, it has the longest paved road in the entire archipelago. One of the biggest conservation efforts is to eliminate all non-native plants and animals that are destroying native and endemic species on the island. There is no longer any volcanic activity but that does not mean there is no evidence. Santa Cruz means holy cross, but it’s English name comes from the British vessel – Indefatigable.

The Twin Craters or Gemelos, meaning twins in Spanish, are two caved in magma chambers of a previous volcano. After years of erosion and extinction, the once full chambers caved in leaving two similar craters that can be seen on a short hike that passes by a Scalesia forest. After the visit to the Twin Craters you will be transferred to the yacht.  You will then be shown to your cabin where you will have some time to settle in before the welcome briefing.

South Plaza is one of the smallest islands with a visitor site, but is home to an incredible amount of diverse flora and fauna. It has a large population of Sesuvium plants like the prickly pear cactus tree that is an important source of food for the land iguana. Just a few years ago mice were finally eradicated from the island, helping the population of land iguanas grow healthily once more.

San Cristobal Island is the fifth largest island in the Galapagos and lies farthest East. It is where Darwin first landed back in 1835 and  where the first permanent settlements were founded. Today the main port Puerto Baquerizo Moreno is the capital of the Galapagos province and houses many government offices, the Ecuadorian Navy, and an airport with daily flights to the mainland of Ecuador. Conservation challenges the island faces include invasive plants like blackberry and guayaba and insects like the blackfly.

La Galapaguera, this Interpretation Center has been open to the public since 1998 and offers extensive information about the history of Galapagos, all ecosystems, geology, and flora and fauna. Giant tortoises are also bred here by the center and roam about in a semi-natural habitat created by the centers’ employees. Within the center are meeting rooms, interpretational panels, auditoriums, exhibits, and much more.

In Espanola Island lies the southernmost island in the Galapagos, as well as the oldest. It is estimated to be about four million years old Because it is so far away from the other islands it has the most endemic species. It is a wonderful opportunity for some great photography of endemic bird species that are found only on Espanola and awesome landscapes created by millions of years of erosion.

Gardner Bay is one of the best beaches in the Galapagos. The white sandy beach is home to a large colony of friendly and playful sea lions. Three different types of finches can be seen. The Espanola Mockingbird is very friendly, but probably looking for food. At one point in time, tourists must have given it water or food, which taught them bad habits. The site is also where green sea turtles will come to nest their eggs between January and March.

Suarez Point is a phenomenal site where you will get to see many of Espanola Island’s endemic species. The trail will pass by the only Waved Albatross breeding site. If you are lucky you might see a young albatross take off for its first flight for up to five years at sea. Older birds stay at sea for months at a time, only coming back to breed. They have the same mate for life and will meet each other each year, only here to reproduce. Other species that can be seen are marine iguanas that stay brightly colored year round, Galapagos doves, Nazca boobies, blue-footed boobies, swallow-tailed gulls, red-billed tropic birds, and Darwin finches.

Floreana Island is one of the most interesting when it comes to human history. The first Galapagos resident was an Irishman who lived on  Floreana from 1807 to 1809. It is the site of the first post office within the islands created by whalers in the 1700’s. Later it became the first island to be colonized by Ecuadorians, but to this day is still very isolated. Surrounded by mystery, in the 1930’s various disappearances occurred and is thought to be because of tension between a baroness and her three servants who arrived after an already settled husband and wife, who gave birth to the first to be born in Galapagos and another couple of a doctor and female companion who lived of the land from their garden. The small population of today lives off the land with homegrown farms and gets their water from rain-filled ponds during the rainy season. There is one hotel with the only phone in the port of Velasco Ibarra where most residents live, the rest live up in the highlands. Transportation is limited and is only available every two weeks.

Cormorant Point is another fun and interesting visitor site. Two beaches can be visited and flamingoes can be seen wading through brackish lagoons looking for shrimp, which gives them their bright and vibrant colors. One of the beaches look green because of olivine crystals and the other is appropriately called Flour Beach a powdery white, made from fine pulverized coral.

Devil’s Crown is a visitor site that boasts the best snorkeling opportunities. Below the surface are amazing volcanic structures that have submerged over time. Hundreds of different colorful fish species can be found here among the coral reefs. Sharks, rays, sea turtles, hammer head sharks and sea lions are also common visitors. It is an underwater spectacle that cannot be missed.

Post Office Bay is a completely human influential site, Post Office Bay is the first official post office created by passing whalers in the 1700’s. To this day visitors continue the tradition as many leave addressed messages on post cards in the barrel to be sent by future visitors while picking up post cards left behind by previous visitors to send when they return home. It is a fun exchangeable activity many visitors enjoy.

On the northern part of the island, Baroness Lookout Point has a beautiful landscape and historic view. It was named after the supposed Austrian Baroness that was the subject of many mysterious disappearances and well-known stories of loathing by those on Floreana. 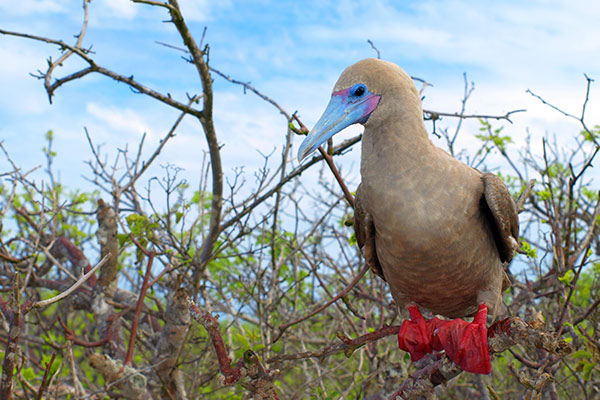