A real treat for nature enthusiasts, this route includes visits to nesting sites of frigate birds and blue footed boobies, explore the remote side of Isabela and Fernandina islands with chances to spot Galapagos penguins, flightless cormorants, Darwin’s finches, giant tortoises, marine iguanas and lava lizards. The route takes you to the summit of Sierra Negra volcano, the largest crater in the islands. Swim with sea lions, marine turtles, rays, eels and other ocean creatures. The Petrel offers luxury on board and an attentive crew. Facilities on board a top notch with private balconies in each cabin and a sun deck with hot tubs and loungers. The navigation is smooth as on any catamaran and the itinerary is optimized for wildlife viewing.

Twin Craters: The Twin Craters or Gemelos, meaning twins in Spanish, are two caved in magma chambers of a previous volcano. After years of erosion and extinction, the once full chambers caved in leaving two similar craters that can be seen on a short hike that passes by a Scalesia forest.

South Plaza is one of the smallest islands with a visitor site, but is home to an incredible amount of diverse flora and fauna It has a large population of Sesuvium plants like the prickly pear cactus tree that is an important source of food for the land iguana. Just a few years ago mice were finally eradicated from the island, helping the population of land iguanas grow healthily once more.

Your cruise has officially come to an end. We hope you enjoyed your Galapagos Cruise! We will now transfer you to your scheduled departure from San Cristobal Airport to mainland Ecuador. Safe travels! 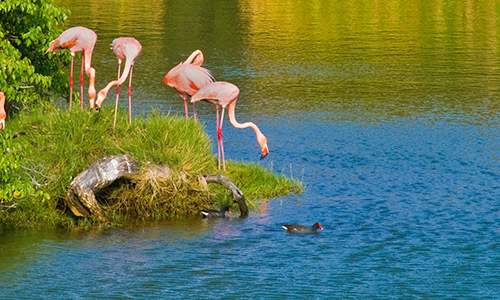