A luxury cruise program in the Galapagos islands visiting Genovesa, Santiago, Bartolome with possibilites to spot marine iguanas, giant tortoises, blue footed boobies and other rare species that inhabit the archipelago. In 5 days you can explore lava fields, sunken craters, cloud forest and be one with nature. The Petrel is a luxury catamaran for 16 guests

Today Santa Cruz is one of the most popular tourist sites. With a population of about 12,000 Galapagos natives, it has the longest paved road in the entire archipelago. One of the biggest conservation efforts is to eliminate all non-native plants and animals that are destroying native and endemic species on the island. There is no longer any volcanic activity but that does not mean there is no evidence. Santa Cruz means holy cross, but it’s English name comes from the British vessel – Indefatigable. The Highlands of Santa Cruz is a very interesting site due to the rich wildlife, hills, ferns, volcanoes and lava tubes present. Exploring the lava tubes is a surreal and unique experience. Here you can see all the different agricultural zones that are present in the Galapagos in one place. The variety of birds makes this a bird watchers delight. After the visit to the Highlands you will be transferred to the yacht.  You will then be shown to your cabin where you will have some time to settle in before the welcome briefing.

Santiago Island is the second Island visited by Charles Darwin was originally named after England’s King James the second. The island was a good source of salt, water, and food for whalers and buccaneers passing. There was a salt mine inland that was used to salt fish and tortoise meat. Land iguanas used to populate the island but are now extinct. From Darwin’s own notes he wrote that land iguanas were thriving quite well since there was no place to even pitch a tent. Santiago Island today is now one of the most visited islands.

Sullivan Bay is a satellite island of Santiago. This is one of the best places to see the Galapagos fur seal. There is not much wildlife to see here, but the old lava formations are quite a site to see with tuff cones, pyroclastic cones, and other volcanic landscapes.

Bartolome Island is another satellite island that derives from Santiago Island. It is home of the famous Pinnacle Rock and is named after James Sullivan, a friend of Charles Darwin who was also aboard the HMS Beagle. Of all the islands, this is the most photographed and is also featured in the 2003 movie “Master and Commander”.

Pinnacle rock is a volcano cone formed by magma expelled by an underwater volcano. The sea cooled the hot lava and as it exploded from contact, the pieces formed together this huge rock of many, many layers of basalt. The huge rock also has a beach where a small population of green sea turtles will nest. Galapagos penguins gather here and swimming can offer beautiful sights of colorful schools of fish and curious sea lions.

Genovesa Island is a horseshoe-shaped island was formed by the eruption of a shield volcano with large slopes formed by gradual lava flows. It is known as “Bird Island” due to the wide variety of birds that can be seen. The only reptile on the entire island is the marine iguana and it is one of the very few places red-footed boobies gather in one large mass. Darwin Bay: Darwin Bay is the result of the shield volcano where one of the sides of the caldera collapsed after years of erosion. It is one of the places in the Galapagos where red-footed boobies can be guaranteed to be seen. Over 200,000 red-footed boobies are estimated to be living in the trees and bushes of Genovesa.

El Barranco is better known as Prince Phillip’s Steps, a steep and rocky path leads up to a cliff with a marvelous view. There is also a Palo Santo forest that is home to nesting red-footed boobies and other birds.

Egas port is also known as James Bay. It is home to quick-footed Galapagos lava lizards, Galapagos fur seals along the grottos and tide pools and is a great snorkeling site.

Buccaneer Cove is better known for excellent snorkeling opportunities and was once known as a refuge for British buccaneers or pirates. The underwater formations are amazing and many different species of fish gather here.

We will also visit Espumilla Beach where marine iguanas lounge and the Sally-Lightfoot crabs attract the hunting herons and perform the dance of predator and prey right before your eyes. Snorkeling is highly recommended as you could find yourself face to face with an octopus, moray eel, shark, or a variety of other species of tropical fish.

In Carrion Point, there is no place to land here so either a panga ride or snorkeling will take place. It is a sheltered lagoon with beautiful turquoise water on the Northern coast of Santa Cruz at the entrance of the Itabaca Channel. 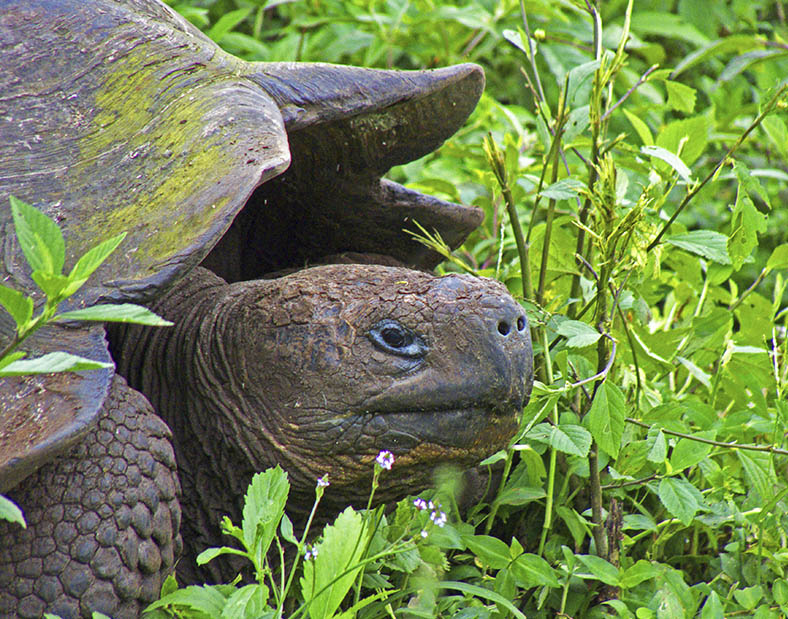