The story of the hacienda goes back to the first colonial times (1.584) where the first allocations of lands located in the region of Cayambe exist, which then became part of the hacienda. In the year 1.668, Felix Luna, sold the property of the Augustinian priests and they transferred the property to the Jesuit priests in 1.690. There’s evidence that some Jesuits, who collaborated in the construction of the Company of Jesus Church in the Center of Quito, participated in the construction of the small Chapel of the hacienda, preserved until today.

With the expulsion of the Jesuits, the hacienda passed to the hands of the “board of temporalities” which initiated the auction of expropriated haciendas since 1.780. The hacienda, and its cultural heritage, belongs to the Jarrin family and its descendants since the year 1.864; who seek to transmit this historic heritage to present and future generations.

In San Juan Mill’s the heritage is interpreted, communicating to the visitors the historic legacy in a dynamic way; generating “conscious visitors”, connecting their interest in an intellectual and emotional way with the significance of the place.

Hacienda Molinos San Juan, How did it begin?

It all started in the year 1.986, transforming the ancient hydraulic mill of the hacienda known as “San Juan” mill or mill of “the Company”, in an original and cozy country house. The initiative was developed with the effort of a family who had the decision to research, preserve and share the character and essence of the mill with their guests and receive them as if they were in their own house. On September 8 of 2.002, the doors to the “Mill” were opened to the world, turned into a center of cultural interpretation.

What do it offer?

Cultural and exploratory experiences in a place filled with traditions, combining them with the peace and tranquility existing in the countryside.

6 kilometers from Cayambe (Andes of Ecuador). Pan-American North (through Otavalo), in front of the Town of Santa Clara. 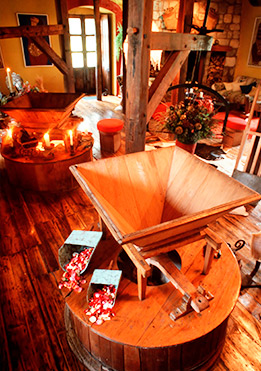 Do you want to travel to Ecuador or
Galapagos Islands?
We are here to help you 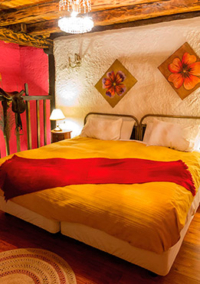 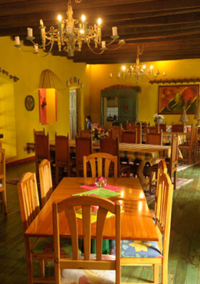 Rest in a “barn” built in 1.960 and renovated in a friendly manner with the environment in the year 2.009. Its construction with bales of hay or chaff, had several reasons: thermal and sound insulation; ecological; collection and construction speed.

Turbines, sieves, dies, grinding stones, flour recipients, storage bins, anyway, they’re pieces that have been employed as decorative elements and are part of the exclusive restaurant, which invites you now to discover the charming and romantic environment, full of aromas and flavors of an old mill evocative of anecdotes and memories.

San Juan Mill rescues, preserves and promotes the recipes of the “cuisine from Quito” and maneuvers the principles of the garden to your table and international slow food, whose central philosophy can be summarized in consuming good, clean and fair products, where we seek to recognize and support the producers of the community.

The restaurant is conceived within the walls of the mill’s bin built in the year 1.890.

In the area of the subsoil of the Mill, the turbine is found, in which a “Brewing Cellar” was designed, to the end of interpreting the properties  of the barley grain, which was cultivated in the hacienda and with which in the time of the Jesuit priests, barley flour and beer was produced.

During your trip to Ecuador or Peru, don’t miss the opportunity to visit the Galapagos Islands; this amazing archipelago is unique in the world. We can help you to build the best itinerary according to your needs. Galapagos tours? Galapagos Cruises? Ecuador Tour packages? we can guide you on your trip

Check out this free guide