Perpetual clouds cover the canopy of a tropical forest that seems pristine on the Quijo Valley in northern Ecuador. The beauty of the cloud forest conceals a tragic, violent past. New sediment analysis of the Valley’s Lake Huila has revealed centuries of indigenous agriculture, which was destroyed by fire and warfare in 1588.

The eastern frontier of Incan Empire was the Quijos Valley, which was located between 1400 and 1532. The Quijos Valley people were not subjects to the empire. However, they retained a distinct cultural identity with the Incas. Historical and archaeological records indicate that the valley was a route for trade between Incan territory, and the Amazon Basin peoples.

Spanish expeditions from 1538 and 1541 arrived in search for gold and cinnamon and were the first Europeans to step foot in Quijos Valley. The region was home to 35,000 native people, according to the Spanish expeditions. Around the Spanish settlement of Baeza in 1577, around 11,400 people had gathered. It was built by colonizers in 1559 along with the indigenous Hatunquijos community. Three out of four of them were dead by 1600.

Many were victims of European diseases that ravaged the unaffected New World population. Many others died under the Spanish forced labor system. Many more were killed fighting against the Europeans in a series if uprisings that took place between 1560 to 1578. Baeza was left with three small huts by the middle of 1800s.

It’s no surprise that European travelers who toured the Quijos Valley in the 18th century marveled at the cloud forests assumed that the landscape was untrodden and unworked by humans. The cloud-covered trees and flowers in Quijos’ cloud forests hide a long history, which was only ended by violence, conquest, and disease. Every chapter of this history is preserved in the sediment that lies at the bottom Lake Huila. It’s a 98-foot wide depression on a lava terrasse 8,500 feet above the sea level. 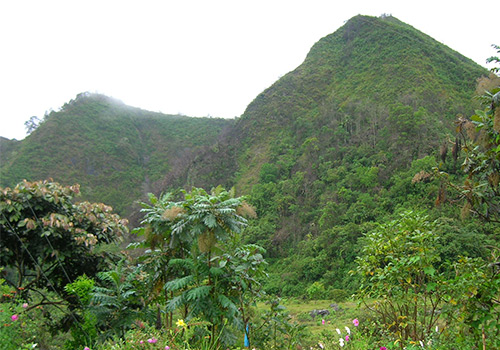 Nicholas Loughlin, an Ecologist at the Open University, and his collaborators took two core samples of Lake Huila. Each core contains approximately 700 years of sediment, which washed into Lake Huila. It also contains pollen from local plants and charcoal from fires.

The layers of lake sediments that were deposited prior to European arrival contained pollen that was reminiscent of an open land, with meadow rue, grasses and cultivated maize fields. It is unclear when people began to grow maize in Quijos Valley, but archaeological evidence shows that maize farming was practiced in nearby Amazon lowlands for at least 6,000 years.

Pre-Columbian lake sediments contained high levels of charcoal and spores from a charcoal-loving fungal genus, Neurospora. Loughlin and colleagues wrote that this is evidence of “local burning” in an environment where montane cloud forests are rarely burned naturally. This suggests that people set fires in the valley to clear fields, cook food, and/or make pottery. More evidence that the Quijos Valley was settled centuries before Europeans arrived is the presence of pottery sherds within the ancient lake sediments.

End of an Era

The evidence of a disaster is found at the bottom of Lake Huila around 1588. The charcoal content in sediment cores increases suddenly by two orders-of-magnitude in these layers. This coincides with historical records that show open warfare in Quijos right after the largest uprisings. Documents from that period show attacks on Baeza as well as the destruction of two nearby settlements Archidona (and Avila). Most likely, the charcoal found in the lake sediments is the result of these fires.

After this, the maize pollen suddenly disappears from the sediment cores and is replaced by aquatic plants and grasses.

These tiny bits of pollen give a glimpse of how nature is reclaiming abandoned farmland with incredible speed. The pollen record, which was taken less than 100 years after 1588’s devastation, shows that the cloud forest with its distinctive trees, shrubs and flowering plants had returned to the Quijos valley in 1718. In the middle of the 1800s, the valley was “unpopulated” and visitors only saw a dense forest that was impenetrable except by trials. 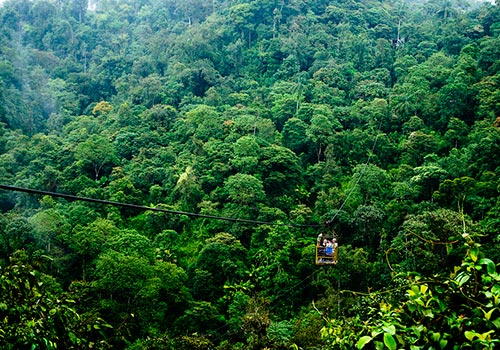 This is an unusually encouraging story from an ecological standpoint. This means that tropical cloud forests can be regenerated after centuries of cultivation and clearing.

Loughlin and colleagues wrote that “Transition from an intensively managed cultivated landscape into one of montane clouds forests alludes to an Andean montane forest’s ability to recover to an structurally sound state over a period approximately 130 years.”

Surprisingly, this has ecological consequences

The resilience of the cloud forest is not an easy feat. The Quijos Valley was already repopulated with people and cattle, by the time the visitors wrote home about the beautiful forests. The lake cores are less pollen-rich and contain more grasses and flowering meadow plant seeds, as well as spores from fungi that can be found in cattle dung.

The authors wrote that the apparent wilderness of the 19th century was a shift in the ecological baseline. Although the cloud forests that they observed on the Quijos valley slopes looked beautiful, they were already being destroyed by human activity.

Even so, the 1800s had a smaller environmental impact than those who lived there before colonization. Loughlin and colleagues compared the pollen types in sediment layers over the past 700 years with the pollen species found in layers of lake sediment that were deposited thousands of years before the first people arrived in the area. The period prior to 1588 was the most markedly different from that of the pre-human cloud forest. The cloud forest was less affected by pre-Columbian agriculture than the settlements and cattle grazing that took place since 1819.

It is difficult to know how and in what ways the pre-Columbian people of Central and South America altered their environment through agriculture, irrigation and construction. Different cultures have left their marks on the landscape in different ways, and archaeologists often find surprising evidence beneath dense vegetation. However, Loughlin and colleagues believe that this study may indicate that we might have underestimated the impact of pre-Columbian South American people on their environment.

The floor of the Quijos valley is mainly cattle pasture today, with a few islands of forest. However, the cloud forest still covers the steeper slopes of this valley high above the Rio Quijos. It is a stunningly beautiful landscape, but there is more to it than meets the eye.

At the present time close to the town of Archidona, Hakuna Matata Amazon lodge protects a small wildlife reserve of 124 hectares of both lowland and mountain rainforest, this was also formerly used as cattle grazing land. Another important proof that forest can regrow. The small first class lodge caters to visitors from all over the world including travelers from Germany, Switzerland, the United States and of course local Quiteños who are only 4 hours away. 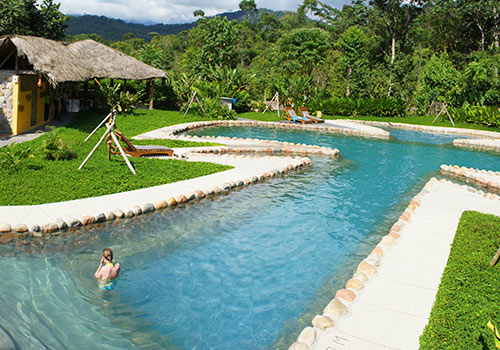 During the pandemic the lodge supported the livelihood of several indigenous families from the Chaupishungo community and with the help from the local government ensured the local population where amongst the first to receive a COVID vaccine.
latinAdmin2022-01-07T20:52:45+00:00