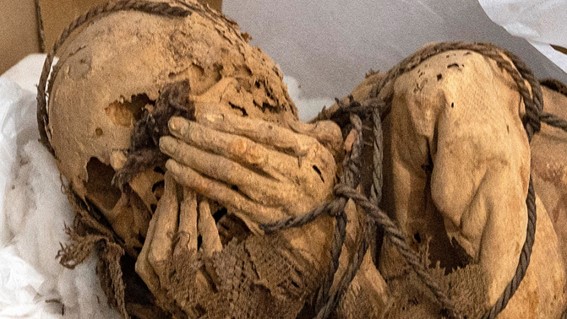 This footage was taken by archaeologists east of Lima of a funerary building. It could have been a mummy as old as 1,200 years.

Researchers from the National University of San Marcos found the mummy, which could have been as old as 1,200 years.

The body was discovered in the middle a square in Cajamarquilla. The body was bound with ropes and its hands covered its face.

According to archaeologists, this burial method is an ancient funeral custom in southern Peru that predated the Inca civilization. Most likely, the mummy was between 25- 30 years old and had traveled from the mountains to the city. He was most likely of high standing.

Researchers from the University of San Marcos found next to the mummy the skeleton of an Andean Guinea Pig (guineapig) as well as what appears to have been a dog.

The archaeological site of Cajamarquilla

“We have achieved the discovery of a mummy that was located inside a funerary structure of subway conical form and when seeing the characteristics it was a mummy that was tied with ropes”, said to the AFP news agency the archaeologist Pieter Van Dalen, responsible for the Cajamarquilla project.

“It is a peculiar and unique characteristic of this funerary context”, emphasized Van Dalen on the finding in this excavation.

Van Dalen said that Cajamarquilla was an urban center with multiple functions. It has a wide variety of sectors, including residential, administrative, and domestic.

According to the researcher Cajamarquilla was “a very large city that could’ve housed between 10,000-20,000 people on a total of about 167 hectares.”

Cajamarquilla, located 24 km east of Lima, is one of the most important archaeological sites in Perú.