The best 4 beaches in the Southwest of the Ecuadorian Coast

Although Ecuador is famous for its Galapagos Islands and other attractions located in the four regions that spread out along the country, without a doubt the cities and towns that were settled down at the shores of the Pacific coast, offer breathtaking sunsets, as well as diversity of adventure sports among other things, that make travelling to Ecuador memorable.

Even though there are too many beaches available in the Ecuadorian coast line, the most popular and attractive spots on the southwest coast of the country are the following: 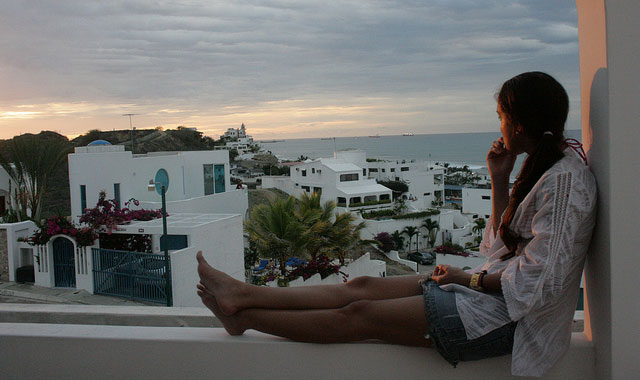 By far the oldest and most developed attraction among Ecuadorian beaches, this little city has the first elite marine club “The Salinas Yacht club” in Ecuador, where international competitions of small yacht races take place. One of the most important navy bases has its presence in this peninsula area. Visitors are allowed nowadays to get access inside the base in order to watch the “Chocolatera”, which is the most extreme west point of the national territory bordering the edge of the Ocean.

On this area, the pacific Ocean clashes with the giant rocks of the cliffs, making visitors perceive the vibrant energy of the ocean. During the evening Salinas has a lot to offer with a variety of small restaurants, bars, and night clubs.

It is a small beach located near the exclusive and residential gated community of “the Capaes”, its houses are characterized by a Mediterranean style on their structure, and some of them decorated by great bougainvillea plants, as well as palm trees. On the extreme west part of the beach, there is a hotel called Faradon Dillon and a marine museum where visitors can observe ancient diving equipment from the last century, as well as whale bones and other interesting devices that are part of the navigation history of the world such as maps, compasses, ship anchors and more. Up north, and nearby the middle of the beach there are small restaurants that are well known for their tasty and local gastronomy where the menu is mostly based on seafood. Capaes beach is a proper place to practice soft adventure activities such as surfing, windsurf and kite-boarding.

A small fisher town that first turned out to be a backpackers and hippies destination, and afterwards, became one of the most popular beaches in the country for its international surfing championships, as well as bohemian night life. The town grew into a popular destination for its friendly opening and tolerance to “mellow and laid back behaviors” propelled by some of the surfers. Montanita could be considered one of the few cosmopolitan spots in Ecuador, where young people from all over the world gather together in order to enjoy its tourism adventure, and night entertainment.

Perhaps the most high-end residential area located in the Ecuadorian coast, is part of the new province of Santa Elena ( known before as part of the Province of Guayas). Olon is a wide beach surrounded by big summer houses along the coast line that invites locals and outsiders to walk through its calm sandy beaches. This place was developed by wealthy people from Guayaquil. In order to escape from the overwhelming crowds, chaotic traffic, and irritating noise of the night life in Salinas, a small group of business owners and investors who shared the same ideals and concepts of a calm weekend, looked for a place that would bring amazing landscapes, as well as tranquility. At the end, that is how this community was born and to a certain degree it became part of the tourist attractions along the coastline route.

If you want to visit Ecuador´s continental coastline, containing some of the most beautiful beaches, we suggest to do the famous Spondylus road, which include all the beaches mentioned previously on this article. Latin trails, through its specialized travel consultants, and along its well established network of tourist agents, will provide different categories of hotels located on this route, and at times even random residences available for short term leasing during national holidays and summer season.