The Galapagos Islands are encircled by thousands of miles of Open Ocean, this fauna of the islands proves to be a natural for the seabirds to occupy and populate. Visitors notice about nineteen resident species while the Biologists estimate that 750,000 seabirds exist in Galapagos which includes thirty percent of the world’s blue-footed boobies.

World’s largest red-footed booby colony and the largest concentration of Nazca boobies in the world.  The fact is that only a few species of land birds inhabit this islands while an estimate of 22 to 23 resident species is endemic to the Galapagos islands. The cool, oxygen-rich waters encircling the islands is one of the major attracting factors for the birdlife in Galapagos.

The birdlife in Galapagos 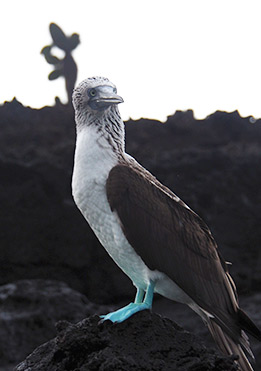 Named for their blue legs and feet, these birds are perhaps the most famous birds of Galapagos and are mostly the first type of booby noticed by the visitors, with their presence in large, colonies on Seymour and Hood. An adult whitish-brown Blue-footed booby has a pale, streaked head, dark mantle with white patches, white belly, and a dark tail.

This bird grows from 2.5 to 3 feet in length and has a wingspan of approximately 5 feet whereas, young blue-foots look quite identical to adults, but it takes them around three years to reach adulthood. The distinguishing factor between males and females, even though they are almost identical, is that the females have a slightly bigger pupil and they honk while the males whistle.

These blue-footed boobies clownish behaviors like bowing, wing spreading and sky pointing with its neck, head and bill stretched straight upward make them one of the highlights of Galapagos island’s trip. However, the National Park is doing a lot of efforts to protect specially five species of Galapagos that need our protection 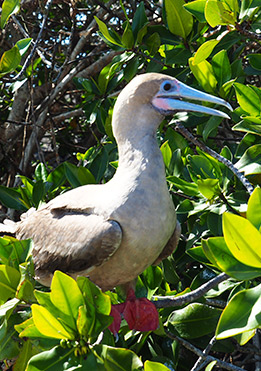 Except for red legs and a light blue bill with a red base, these birds are all brown and are the smallest of the Galapagos boobies. Red-footed boobies have a length of 2.5 feet and a wingspan of 4.5 foot and are readily distinguished by its red feet.

They are often mistaken for masked boobies with whiteheads, red feet, and blue beaks. The red-footed boobies are more in a population of the total Galapagos boobies, and they are also the less frequently seen. The reason behind their less appearance even though they are the most populated is because they are only found on the more outlying islands like Genovesa. Red-footed boobies feed far out to sea, and they build their nests on trees. These boobies are a must-see in Galapagos, you should read the post the top sites you should not miss in the Galapagos Islands 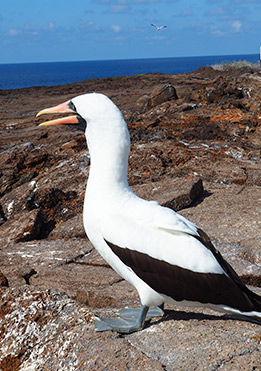 These large birds of pure white color with a black band at the edge of wings and tail are the most common Boobies in the tropics and subtropics and are the only boobies in the Galapagos to have an annual breeding cycle. Nazca Boobies are also called masked boobies because of a blackish area of bare skin surrounding its orange bill that forms the face mask.

Nazca Boobies are the largest of Galapagos boobies, their length measures to 3 feet and has a wingspan of 5 to 6 foot. The trumpeting quack distinguishes a female from a male which whistles only. They often nest near cliff tops which gives them an advantage when taking off. Definitely,Galapagos  is a paradise for birdwatchers 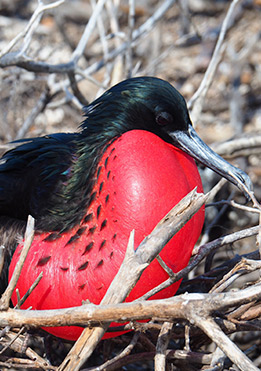 A frigate is also known as Man O’War, are large, streamlined, a black seabird with a long, hooked beak to catch fish on the surface because unlike other birds they cannot dive underwater to catch prey.

They have the largest wingspan of almost 8 foot, which the largest of any bird on the planet. Frigates usually steal food from other birds, especially from red-footed boobies and they also settle in others’ nests to raise a family. 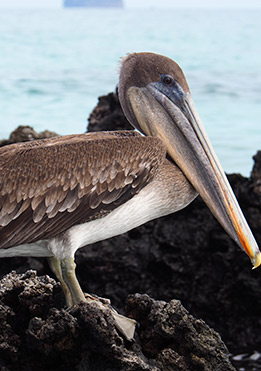 Their huge pouched bill and large size make them easily and instantly recognizable for the visitors. These birds have wide fingered wings, are brownish, they are 4 feet long and have a wingspan of 6.5 foot. However, during the breeding season, the adult brown pelicans have a white and chestnut markings on their heads and necks. These birds breed throughout the year.

These Pelicans are good gliders and feed by shallow plunge diving. They also scoop up a maximum of 2.5 gallons of water in their pouches, and when the water drains out through their bill, they swallow up the trapped fish.

It’s time to travel to
Galápagos and Ecuador
Do you have some question? we are here to help you 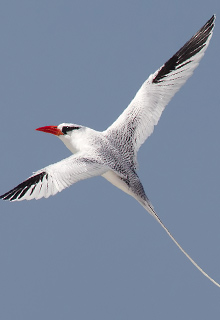 These birds are considered to be the most majestic white sea birds of Galapagos, and their most attractive feature is the two long tail streaming feathers which are as long as the rest of their body. Red-billed tropic bird is 2.5 long including the feathers and has a 3.5 feet wingspan. Another noticeable feature of theirs is the coral red bill and black eye stripe. They feed by diving out into the sea for fish and squid.

Red-billed tropic bird is often seen to fly in small groups, and they make their nests on ledges and in holes in cliffs or rock piles. 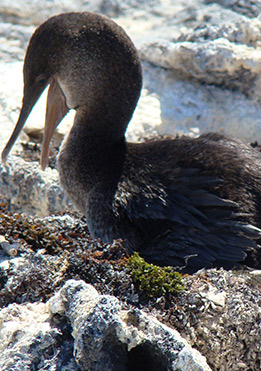 As the name suggests, these birds cannot fly. Therefore, they are restricted to the lava shoreline and are frequently seen to live in the westernmost islands. The adult flightless cormorant has turquoise eyes, and their top is colored black while their underneath is dark brown. Their smaller wings have no practical use because it does not produce enough oil.

Thus losing the ability of waterproofing, but due to its natural balance, it makes them better swimmers. These birds have four webbed toes and have a powerful, heavy legs unlike any other cormorant, which enable them to jump from rock to rock. 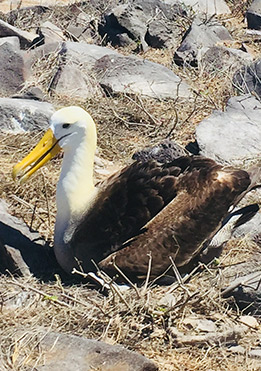 Being the largest bird on the islands, Waved Albatross is one of the most elegant flying birds which can spend years on the sea without having to come on land. Its length measures to an average of 3 feet, and it has a wingspan of 8 feet, and It weights up to 11 pounds.

Most of its population, which is estimated to be around 12000 pairs, nests on Hood. The colonies are active from mid-April to late June, where it does not return for about five years once it leaves its nest. They tend to remain at sea from January to march. 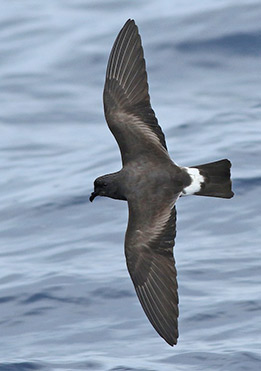 These smallest of the seabirds have a relatively long, narrowly winged storm petrel, and are known for fluttering over the surface of the sea while feeding on plankton, which seems to appear as if they are walking on water. Storm Petrels are dark brown.

Their small size often seems to be difficult for the visitors to identify them. Their length measures up to 6 to 8 inches. These birds are visiting their breeding grounds by day and feeding at night. Their breeding grounds, however, have never been found. 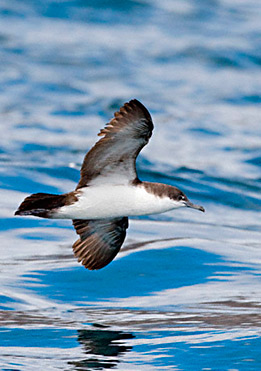 These medium-sized birds skim close to the water and are observed to be always on the move either individually or in flocks. They are dark brown colored birds with white bellies and a white throat. They are often confused with Hawaiian petrel, but the size and white forehead and face of the Hawaiian petrel distinguish itself from the Audubon’s shearwater.

They are often sighted near the cliffs, where they nest. These birds feed on fish larvae, small planktonic crustaceans, small fish and also squid. Also, they are not seen to fish in flocks.

If you want to travel to the Galapagos Islands, we invite you to see our Galapaogs Cruises page, where you will see the luxury yacht Sea Star Journey, the comfortable cataamaran Seaman Journey and the daily tour catamaran Galapagos Hopper