In the altitudes of the Andes, Otavalo lies at an elevation of 2,532 metres (8,307ft). The northern town is famous for its craft market where the people of Otavalo congregate to sell handcrafts. The Otavalo Market is one of the most spectacular sights in South America, outstanding for both its shopping and its cultural significance. The people of Otavalo use market day the same way their ancestors did during Ecuador’s pre-Colombian era, when jungle products were traded for highland goods.

The indigenous people of Otavalo are easily identified by their traditional dress. Men can be seen wearing blue or grey ponchos, white calf-length knickers, rope sandals, dark felt hats, and the shimba, a long braid that almost reaches the waist. Women are dressed in intricately embroidered white blouses, woven black skirts, and shawls. Jewelry includes strings of necklaces with gold beads, and red coral bracelets. To the people of Otavalo, their dress is part of their indigenous identity and it outwardly expresses their ethnicity.

Most indigenous Otavaleños speak Quichua, evidence of their ability to hold on to traditional cultural values and practices despite oppression from colonization. Unlike other indigenous groups, the people of Otavalo survived as a distinct ethnic group. Sometime after the 16th century their original language was lost and they henceforth spoke Kichwa, the Quechua dialect of Ecuador.

The people of Otavalo are an indigenous group native to the Andean mountains of Imbabura Province, and have thrived in spite of Inca and Spanish invasions. Otavaleños and other Andean groups of northern Ecuador are often identified with the pre-Columbian Cara people and Cara culture, descendants of the semi-mythical Quitu culture—the origin of the name of the Ecuadorian capital, Quito.

Galapagos & Ecuador tours for everyone
Let us know your budget, and we can build a tailor-made tour.

The brief period of Inca rule did little to change Otavaleña culture. Prior to being forced into the Inca Empire in the late 15th or early 16th century, the region north of Quito to near the border of present-day Colombia consisted of several small chiefdoms including Otavalo, Caranqui, Cayambe, and Cochasquí. These chiefdoms were similar in artistic techniques, subsistence, settlement patterns, and probably spoke Barbacoan languages.

The Otavalo Textiles and Handcrafts Market dates back to pre-Inca times when the people of Otavalo were traditionally weavers. Descended from centuries-old artisans, creating handcrafts is the principal activity of the people of Otavalo. On any week day, Plaza de los Ponchos is a rainbow of textiles and handicrafts; blankets, wall hangings, handbags, hammocks, table runners, alpaca-wool sweaters, socks and scarves brighten the largest craft market in South America. Centered around Plaza de los Ponchos, the weekend market extends throughout intersecting streets for several blocks in every direction.

Maize, potatoes, and domesticated guinea pigs are features of Otavaleña agriculture, so it stands to reason the cuisine reflects the farming. Quimbolitos, made from corn, Locra Soup from potatoes, and Roasted Cuy are popular delicacies along with local favorite Fritada; fried chunks of pork served with white corn.

Otavalo is a magical mix of history, customs, culture, cuisine and folklore. Don’t miss this fascinating city while on your Ecuadorian vacation. 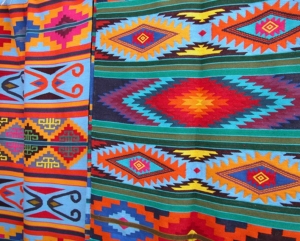 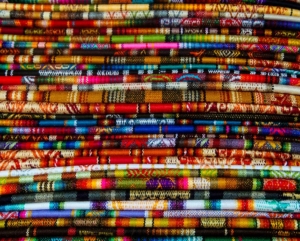 Check out this free guide about the Quito Six Senses Tour, a new way to discover the city