Cruise Train from the coast to the Andes

Cruise Train from the coast to the Andes

An unique experience by train

Day 1We started out at Bucay, the 2nd stop, we boarded this beautifully decorated train, in classic republican style, a remnant of the first passenger trains from the early 1900s. You could almost expect to find the mythical general Eloy Alfaro on board.

Bucay is a colorful town in the Ecuadorian coast. Small houses, old run down wooden constructions. At the Bucay station we were greeted by guides who explained the rules of the trip. They gave us a quick briefing on all services and what we could expect throughout our journey. The train is nice, seats we were assigned looked lovely, although a bit uncomfortable, yet you spend little time seated (I discovered later, the photo opportunities keep you off your seat), there also is a living room with couches and a bar with unlimited soft drinks, hot tea, coffee, Ice cappuccinos, hot cocoa, fresh fruit juices, and lots of tasty snacks. Snacks are made up of local delicacies including milk candy cones, small pastries called “alfajores”, toasted corn with sugar cane syrup (locally tagged as “caca de perro”), sweet lima beans and other small delicacies. The back side of the train counts with an open balcony area that serves as a look out and photography platform (12 people at a time are allowed, so taking turns is necessary). 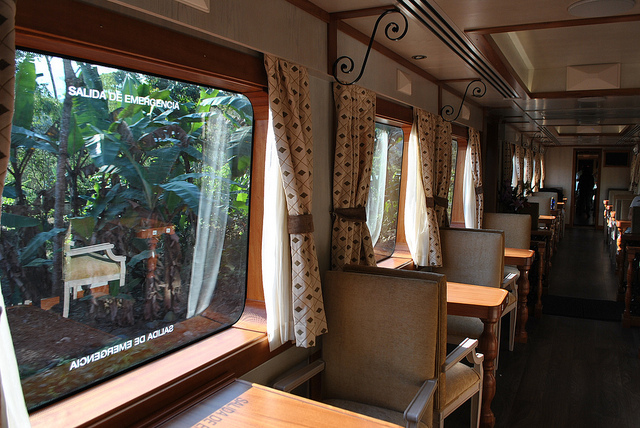 As soon as you leave Bucay you start enjoying the beautiful scenery of the Ecuadorian lowlands, the train goes over bridges crossing several rivers including the xx and the xx. Surrounded by tropical forest interrupted by banana plantations and adventure lodgings. More than 1 waterfall crossed our path and we crossed a few bridges over running rivers. We started to ascend towards the Andes, and in less than 3 hours we were in the transitional zone (subtropical) and made a quick stop at the small town of Huigra, the last part of the tropics in our journey. From here were about an hour and a half from Chan Chan the station right before the legendary Devils Nose. The name comes from the terror that arised amongst railroad workers due to the amount of deaths during the construction for the Ecuadorian railroad: snake bites, malaria and other diseases took their toll. Both Ecuadorian and Jamaican workers were employed. The work was not well paid and was almost compared to a modern day slavery even though slavery was already abolished from Ecuador many years earlier. The mistreatment of workers and hard work added by many deaths, specially in the section between Chan Chan and Alausi was the birth of the name Devils Nose to recognized the mountain the train climbs on switchbacks.

In modern times this is still an amazing monument to creativity and engineering. The train climbs the mountain on switchbacks going back and forth almost ascending a full vertical km. A quick ½ hour and we are in the Andes in the town of San Pedro de Alausi. The town is considered an Ecuador heritage site with over 100 hundred homes almost a century old and still maintaining their original construction and local materials. A beautiful site if you get a chance to stroll through its narrow streets. The locals are friendly indigenous people and wear colorful ponchos and wool hats keeping on their ancestral traditions at the market and nearby agricultural fields. 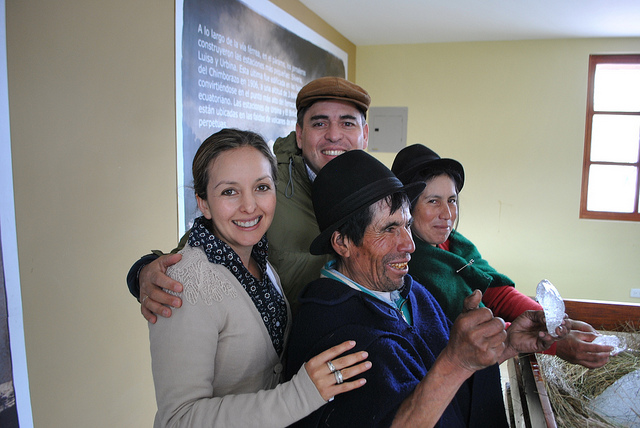 At Alausi we switched over to the bus for a quick ride on to Guamote, this leg was not done by train due to a landslide and was temporary closed for another few days until they could repair the tracks. As our bus left Alausi you could spot in the distance the elephant mountain, known this way because of its amazing resemblance to the face of a paquiderm with ear and trunk standing out. The bus ride took us on the Panamerican highway through the picturesque Andes of Ecuador, it runs at the border of an extinct volcanic crater. The area is called the “Golden Ball” half due to the legend of gold found by railway workers and half due to the color of the mountains covered in sulfur. As we arrived at Guamote we could see the indigenous people at a small artisan market which is present daily at the same place of the main Thursday market, unfortunately our visit was on a Monday – the train going from Quito to Duran visits on Thursdays (Guamote has the highest concentration of indigenous people in the Andes of Ecuador, the market is amazingly colorful with livestock and produce being traded as well as sold). Here we enjoyed a delicious Andean fusion lunch prepared by the Inti Sisa (sunflower) foundation. Pumpkin cream soup with pieces of apple followed by a main course that included a Quinoa salad, Beer cooked llama meat and orange chicken. Dessert was made up of bunuelos (Andean pastries) and fresh pineapple juice to wash down. 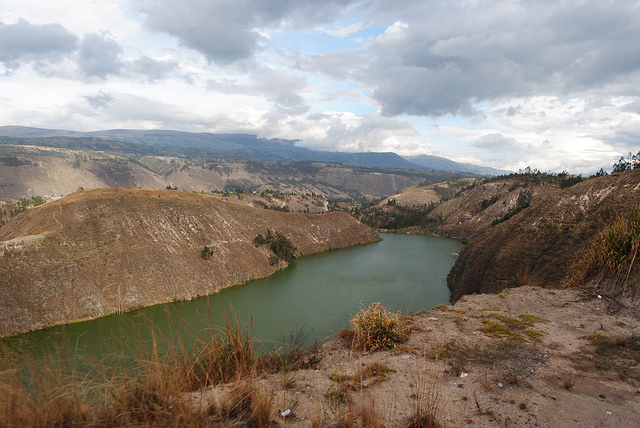 We enjoyed a short guided tour of the Inti Sisa foundation, where more was understood than explained, people were already gone for the day. Our guide gave us a quick briefing on the artisan crafts local women create at the sewing workshop, the foundation also has computer education, a kindergarten and a lovely quaint hostel with incredibly modern bathrooms with hot water and clean beds. A bit chilly but very authentic with indigenous mural paintings and side excursions on offer to visit the local communities, hiking and interaction with indigenous people.

The hostal does look like great value. We continued our journey to Colta Lake, here we can view a reed covered lake with small populations covering its shores, along the way we could view many agricultural patches with quinoa, potatoes and other Andean crops. Livestock pasturing on the side of the tracks and of course the friendly children waving as the train passes by. Our next excursion included Balbanera chapel, a small church, considered the first in Ecuador built around 1535. The chapel is of great historical value, you can view indigenous art on the façade, it was built by Puruhae people, and they did not know what an angel looked like and so on with other religious figures, so they blended in Andean symbols and indigenous faces into the stonework making it quite unique.

It is a short visit, also available are souvenirs at a small group of stalls at the side of the plaza. Here our guide explained about the first foundation of Santiago de Quito and the confrontations between Puruhaes and Spaniards and how religion was key in the conquest of the Amerindians. The guides are not constantly talking and babbling on during the trip, there are available for interpretation and questions, that have to be asked, if you wish for more information, on an ad hoc basis. Very friendly and approachable and always available. They give short briefings at each stop and at key points during the journey.

Our final stop of the day was the central station at Riobamba. From here we were taken to hosteria Abraspungo a lovely country inn just 2kms from the center of Riobamba. It was a short 15 min. bus ride. Rooms were very nice with private bathrooms and warm beds. Very clean. The food at the Restaurant (included) was very good. Drinks were not included (Actually not included at most of the restaurants during the trip). 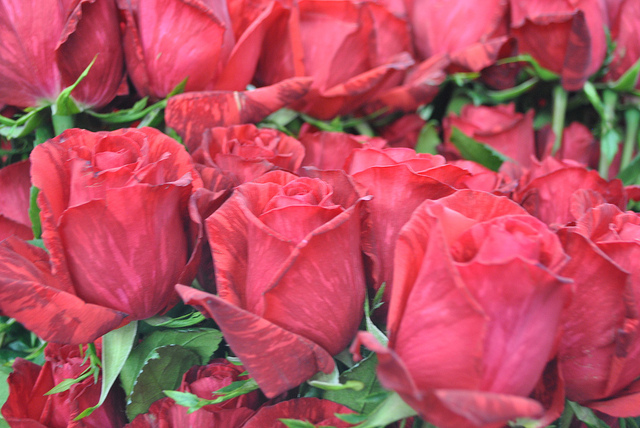 Day 2 Early departure from our hotel 7h00 am. We boarded the train around 7h30 am.

This day weather was great, we were very lucky we were able to spot Chimborazo without clouds from the moment we boarded our bus towards the train station. This was perhaps is the most beautiful scenery during the whole of our trip. The snowcapped giant Chimborazo and the surrounding mix of agriculture, grasslands, paramos and the sand dunes of “el Arenal” was pretty amazing. Around 11h00 am we arrived at Urbina train station at 3600 mts above sea level, here we visited the last “Chimborazo ice man” translated “hielero del Chimborazo”, his name Baltazar Urcu an indigenous man not taller than 1mt40cm but stronger than many, his job in his earlier years and still done up to the day was to carry ice from the Chimborazo glacier to the city of Riobamba, He could carry 40 kg. + blocks of ice in record times of 4 hours from the summit down to the city! A terribly exhaustive job, not well paid. Now he tends the museum of the station and tells his story. Here we enjoyed a delicious snack (a cheese filled tortilla) with hot sangoracha tea, great for contraresting altitude disease.

From Urbina the train started to descend towards the Ambato station. On the way we passed by several small towns including the village called Cevallos 2850 msnm and its train station. A large quantity of population here worked on the railroad in the past , so the town has a strong railway tradition. The scenery is mainly agricultural, composed of fruit plantations, specially tree tomato and corn fields. As we entered Ambato, the scenery changed from open fields to small homes and industrial areas, finally arriving at the Ambato train station. Happy citizens waved at the train. It was the first time it passed by after 15 years of non-operation. Yes we were on the maiden voyage of the Cruise train.

A magical moment was to see an indigenous man from the fields drop his shovels and pull out a camera to take a picture of the train. We enjoyed a quick visit to the Ambato cathedral and a small art gallery in the city center, here we were delighted with a history talk from our guide Maria (a bit moody, but excellent). She explained how Ambato was destroyed by an earthquake in 1949 and this is why it does not count with a colonial city center like Quito or Cuenca. We were able to admire the paintings of Luis A. Martinez who was talented enough in his time to make some of the most beautiful accounts of the Andes including paintings of Chimborazo, Carihuairazo and Altar mountains amongst others.

We were taken for lunch to a boutique hotel called “La Casa Roka”, here I went for Quinoa covered chicken with uvilla sauce and had some really good homemade ice cream (helado de paila, handmade in a bronze caldron). After lunch we boarded our train again and started back towards Latacunga, highlights on this leg are the views of fruit plantations and the Yambo lagoon, the green colored waters are considered enchanted. A last pleasant surprise was the visit of the Nevado roses plantation. One of the leading plantations in Ecuador, awarded for its sustainable practices both with its workers and with the environment, here we learned about the different types of Roses and the full production process from stem to box. 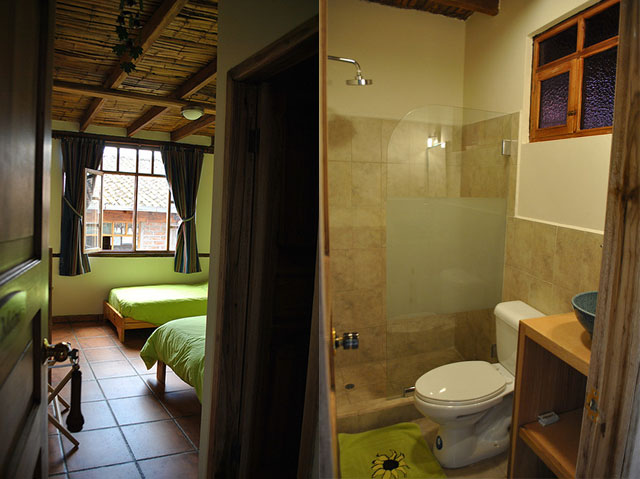 A final treat was a mint lemonade and a passion fruit cream mixed in with edible organic roses from the plantation, this was a unique dessert, delicious! Never tasted anything like it before. The trip ended at Latacunga train station with some great views of Cotopaxi volcano. Here we boarded the bus to Quito, a peasant ride on the Panamerican highway, with luck you get views of several volcanoes including Illinizas, Ruminahui, Corazon and the highlands straw fields. After an hour and a half ride our trip ended at the Swissotel. A nice final touch was crossing through the beautiful city of Quito.