One of the younger islands, Isabela Island was formed by the joining of six shield volcanoes — from north to south — Ecuador, Wolf, Darwin, Alcedo, Sierra Negra, and Cerro Azul. All of the volcanoes except Ecuador are still active, but not directly dangerous to humans. Eruptions have been recorded in the last fifty years for Wolf Volcano (1963 and 1982), Alcedo (1993), Sierra Negra (1963, 1979, and 2005), and Cerro Azul (1959, 1979, 1998, and 2008). Isabela provides visitors with excellent examples of the geologic forces that created the Galapagos Islands, including uplifts at Urbina Bay, tuff cones at Tagus Cove, and pumice on Alcedo Volcano.

Fishing, farming, and tourism are the main sources of economy. Unlike the other large islands, vegetation on Isabela does not follow the normal pattern. For instance, the lava fields along with the arid soils are not good to support the varied life zones as on other islands.The high elevations of Wolf and Cerro Azul Volcanoes reach above the cloud cover, resulting in an arid zone at the top of the island. The island’s rich fauna is home to more wild tortoises than all the other islands combined, with a separate species on each volcano. On the west coast, the upwelling of the nutrient-rich Cromwell Current creates a feeding ground for fish, whales, dolphins, and birds. These waters have long been known as the best place to see whales in the Galapagos as 16 have been identified. 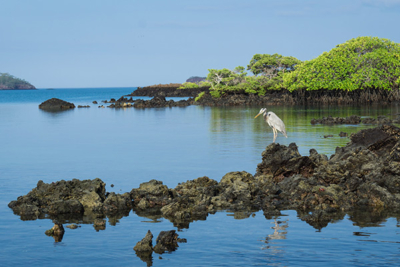 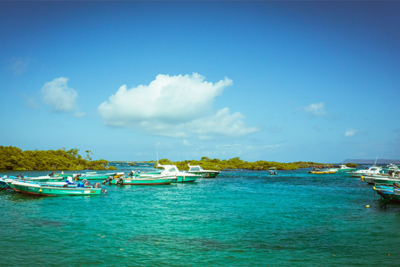 Villamil is the most beautiful townsite in Galapagos, with its long, white-sand, palm-lined beaches and several brackish-water lagoons frequented by pink flamingoes, common stilts, whimbrels, white-cheeked pintails, and gallinules. Throughout time isabela has not ceased to amaze when it comes to growth. Nowadays Isabela’s main source of economy is increasingly being tourism. Since the 1990s hotels, restaurants among other sole traders have set their own goals and services for tourists. For instance, in 1980s the town had 2 restaurants only. However in 2008, the town grew enough to have 18 restaurants. However, the town still retains its relaxed attitude in contrast to Puerto Ayora on Santa Cruz and Puerto Baquerizo Moreno on San Cristóbal.

When it comes to locations worth the visit; Sierra Negra Volcano is one of the most impressive. Its caldera measures 10 km across from north to south and 9 km from east to west, and is considered to be the second largest caldera in the world. Visits to Sierra Negra require a 45-minute drive from Villamil followed by several hours of walking or horseback riding. The site provides incredible vistas of the volcanoes of Isabela as well as Fernandina. At the other end of the caldera visitors who want to make a longer trek can view a system of fumaroles, known as the Sulfur Mine. Sulfur in the form of crystals has been deposited on the fumaroles for thousands of years, something that cannot be seen in the daily basis.

Four visitor sites are easily accessible from Puerto Villamil — Villamil Lagoons, Tortoise Center, Wall of Tears, and Tintoreras. The first three are accessible by foot while a panga ride is required to reach Tintoreras. An interpretive trail runs from town, through the Lagoons, and ends at the Tortoise Center. The beach and lagoons near Villamil are the best sites in the archipelago to view migratory birds.

The Tortoise Center of Isabela was completed in 1994 and houses tortoises from the populations of southern Isabela, visitors can see both hatchlings tortoises and the older breeding animals.

The Wall of Tears is an interesting historical site, usually visited by tourists staying in Villamil for a few days. It is a 6-km walk (one-way) from town (it is possible to get a ride half way). The trail passes the Villamil cemetery shortly after leaving town, with tombs of the first settlers. About half way to the Wall, the trail passes a white sand beach with surrounding lagoons where all four species of mangroves that exist in Galapagos can be seen. The trail continues through the dry zone until reaching the Wall. A penal colony existed on Isabela from 1944 to 1959. The Wall of Tears was built by the prisoners to keep them busy. It stand 5-6 m high, 3 m wide and is approximately 100 m long. It is a testament to a period of cruelty and torture.

To reach Tintoreras, a group of small islets off the coast, visitors must take a dinghy ride. The small bay of completely tranquil turquoise water provides habitat for sea lions, sea turtles, marine iguanas, rays, and other species. The bay is connected to a shallow crevice of crystalline water that is frequented by sharks and marine iguanas during the day.

At first glance, Moreno Point appears to be a lifeless lava flow. However, its black surface at the base of Cerro Azul is dotted with numerous lagoons containing a wide variety of life. Commonly species include flamingoes, paint-billed crakes, white-cheeked pintails, and common gallinules. The trail branches at a couple of points to enable the visitor to observe more of the area. The lava flow is very young and has several endemic species known to be early pioneers in barren lava fields.

While no visits are allowed on land, this visitor site is included in many tours to the western islands. The visit is by dinghy and snorkeling is also allowed. The lagoon at Elizabeth Bay is a resting and feeding place for sea turtles. The mangroves surrounding it are principally red and black mangroves. Visitors will also see rays, flightless cormorants, penguins, pelicans, lava herons, and other species.