Guayaquil is the largest and most populated city in all of Ecuador, and at the same time, it’s considered its economic and commercial capital. One of the main factors of growth is undoubtedly its great seaport. Imports and exports through the Pacific Ocean have represented significant business opportunities.

One of the two international airports in the country is in Guayaquil, so it’s very likely that you make a stopover in the city if you go to Quito or Galapagos.

One of the main attractions of Guayaquil is the tropical climate. On average you feel a temperature of 30° throughout the year. So if you plan to change the scenery on your trip, this is a great option.

You can take advantage of your stay to visit the most outstanding tourist sites in the city; it’s always suggested thata a tour guide goes with you so you can have an incredible and safe experience.

This pier is one of the urban regeneration projects of the old Malecón Simón Bolívar. It’s quite an adventure to walk in its 2.5 kilometers of extension. It’s the perfect place to enjoy traditional dishes, admire historical monuments, gardens, museums, cinema and you can board one of the boats that will take you for a pleasant ride along the Guayas River.
One of the most recent attractions of the pier, is La Perla, a 57-meter tall ferris wheel that has been decorated with thousands of LED spotlights and which turns out to be a show at night. Without a doubt, the ideal place to take a panoramic photo of the city!

This theme park is located 7 kilometers from the city center. In its eight extension areas, you will see incredible animals and understand more about the architecture of the Guayaquil of the nineteenth and twentieth centuries.
The wild area has 4 natural hectares that house more than 50 species of animals, among which are birds, mammals, and reptiles. In the historic area, you can visit the recreation of typical houses of Guayaquil in the first decades of the twentieth century, where the city had a tremendous economic boom.
In addition, you can admire a replica of an “Urban Car,” which was the means of transportation in Guayaquil in 1866; at that time, this car was pulled by mules or horses. 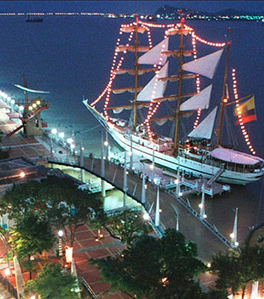 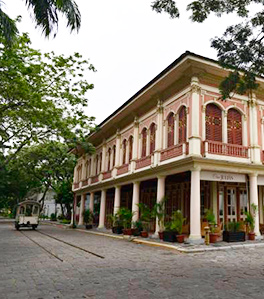 It’s time to travel to
Galápagos and Ecuador
Do you have some question? we are here to help you 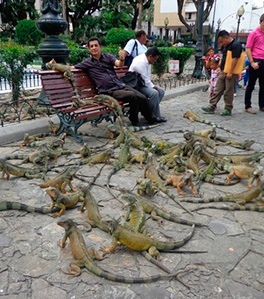 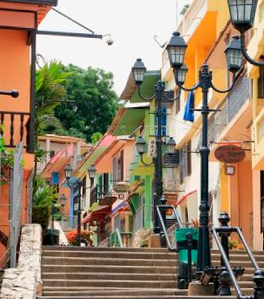 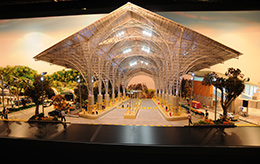 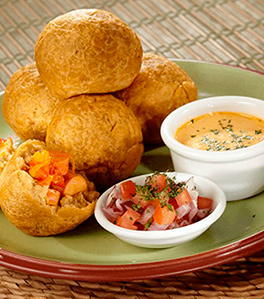 The Seminar Park is one of the beauties that impress the visitors the most. Having close contact beautiful iguanas that walk relaxed near their visitors, is something very uncommon for everyone, especially if you are in the middle of a city where the spontaneity of nature is not typical.
This park is located just in front of the Cathedral of Guayaquil, which is a must see. Its walls and structure tell the story of a city that was always quite attached to their beliefs.

The stairway to the hill of Santa Ana

The hill of Santa Ana is the most important historical place of Guayaquil. This is the origin of the city and expanded to its extremes. For many years, it wasn’t essential, but since the year 2001, a program of regeneration of the house of the hill was made.
The community has made a significant effort to keep it clean and safe. Above all, on the steps that lead you to the top, which are surrounded by picturesque houses, restaurants, places to buy souvenirs or merely to take a well-deserved rest.
The 444 steps of the hill, take you to one of the most spectacular viewpoints of the city, from where you can admire emblematic places such as the most popular football stadium in the city, the Monumental.

Guayaquil has some museums of international interest that you can’t miss, as they are; the municipal museum, the anthropological museum, the museum of contemporary art, and of course, the miniature museum. The latter has been mentioned on many occasions with awards for artistic creativity.

The cuisine of the city delights us with the most exceptional and exotic national dishes that attract people from all over the country and beyond.
The most traditional thing is to eat all the derivations of green bananas, such as green tortillas with cheese, mashed green, green bowls, corviche and more.
Also, you can’t miss the most traditional local dishes, such as stew with roast beef, fish onions, crab, seafood and the many soups of guts and their incredible local names.
Don’t forget to check out the Galapagos Cruises page, or if you prefer, also we have someGalapagos land tours or day tours.