Galapagos is a well renown paradise, not just for traditional tourists, but also for scientists who are willing to visit and observe this live laboratory discovered by Charles Darwin in the 18th centuries. However, there is another class of visitor that is increasing in number within the last few years, for this particular destination in the Pacific ocean.

This third kind of visitor is the explorer, who searches for adventure along natural´s environment and its enchanting paths. Explorers can get fascinated by the islands and its landscapes, along its exotic flora and fauna that constantly show the concept of life.

If you are more focused on adventure, and alfresco explorations, then the Galapagos Islands is the place to be.

So, let’s start by explaining the meaning of Hiking. It is just a walk based on pre-marked or pre-charted paths that will show you the way through the destination you are visiting. When the hiking activity is apply during the daytime, it is called day Hike, whereas if it is apply during the evening, it is called night hike. By contrast, trekking is a long journey undertaken on foot in remote areas or places where is not transportation available, whatsoever. It implies long walks through a number of days on uncharted paths along with challenging environments in the wilderness, along hilling or mountainous surfaces. Nonetheless, keep in mind that trekking does not necessarily means mountaineering.

After this brief explanation, perhaps the chances to get a trekking activity in the archipelago would be in the scenario of doing some special research in the wilderness, or camping outside the boundaries of the established paths for visitors and tourist on the ecosystems of then islands.

In order to move outside the path or territory allow for tourist, you need special permission from the Galapagos National park, which depending of the length of the research can be granted for a period of months.

However, let’s start with the characteristic of the spots that are considered popular for hiking, where you can enjoy as a regular tourist in the archipelago. 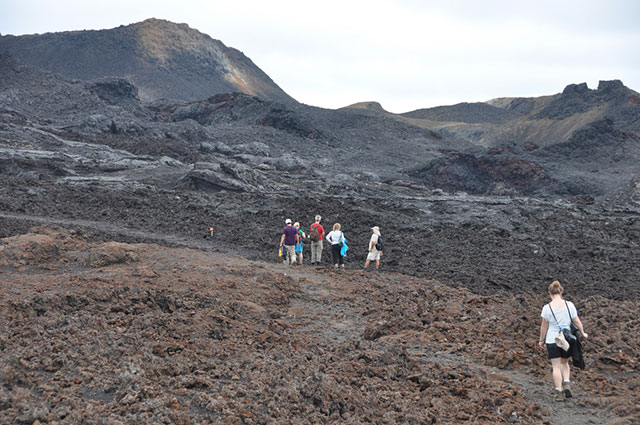 It is considered the biggest of six volcanoes located in Isabela Island, and the island itself is the youngest in its creation (about 1 Million years old) among the whole archipelago. Currently, it has 5 volcanoes, that are active, and the most recent activity was recorded in Sierra Negra in 2005, where scientists, and naturalist guides could observe the magic scenario of molten lake of lava, which was produced by its amazing eruption.

Sierra Negra has 5 miles of hiking lengths, into the highest point of the westerly island of Isabela. On top, the landscape looks more like a piece of art, where lot of fields covered black lava stones, converge into marvelous volcanic cones where you can watch yellow sulfide, evaporating from the surface.

As you climb to the top of the volcano, the temperature drops, considering that the highest point of crater´s peak is 1490 meters above the sea level. At this point, the clouds moves around in order to reveal the great sweep of the caldera, which size is 70 sq km, and it is considered the second largest in the world. At this level, you can observe the island’s geography in its splendorous immensity. Finally, we will close it up with Volcano Chico. 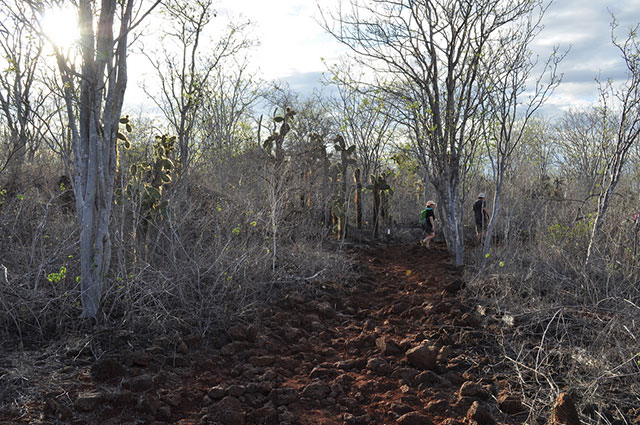 It is a collection of smaller cones, which are considered a flank along the Sierra Negra. In this area the landscape will change into a carmine-black wall along with the presence of volcanic ash. The surface looks like a petrified black ocean. This rough surface is known as “aa” from the Hawaiian expression for “stony with rough lava”. It´s been said that earlier explorers reported that the “aa” surface ripped the leather from the shoes. The surface in this particular area has been shaped for centuries, through a series of volcanic eruptions.

Each flow marked on the surface of this volcano shows a different texture, making the Galapagos Islands an adventure. As far as you continue on your “day hike” through the vast surface, you walk on a smooth flow of unbroken lava. On this particular surface the lava didn’t ruffle as it cooled. Here, the vegetation is sparse; a few thousand-year-old candelabra cactus has dodged the various eruptions, and still stands erect on the horizon. As you get down the road, the hike becomes easier until you approach to the low lands nearby the shores.

Is a private ranch, where tourists and visitors can come by in order to see the giant tortoise in their natural habitat and observe its behavior on the wilderness. According to the season, you will be able to see a significant amount of tortoises. Usually, during rainy season the presences of the giant tortoise is more predominant in the area. Nearby there is a ranch house, where the lucky owner can see everyday these famous giant tortoise, a luxury that very few people have access.

Located on the north-western side of Santa Cruz Island, Cerro Dragon has 1600 meters length of path that goes through 3 different natural environments. The place got this name in memory of the few land iguanas that were found in healthy conditions back in the mid seventies. In attempts to preserve this specie in Santa Cruz island, some of these iguanas were taken into captivity by the Charles Darwin Research Station, while others were allocated in the islet of Venice. The first offspring were born in 1974, and eventually this specie was reintroduced in 1990 into Santa Cruz highlands.

Additionally to these Galapagos Islands tours, there are the famous lava tunnels, which have been illuminated on the inside for a better appreciation of their structure to visitors and tourists. The hike in here will last 15 minutes approximately.

So in case you decide to engage in any of these hiking activities, be aware that you need a pair of good sport shoes, or exploration boots. For all these random activities, LATIN TRAILS will be always open to give you the best itineraries among island hopping services, as well as the most popular visitors spots in the Galapagos Islands.