We celebrate the 38th Anniversary of Quito as World Heritage city

We celebrate the 38th Anniversary of Quito as World Heritage city

Ecuador is on celebration mode: Quito, the capital, was considered World Heritage by UNESCO 38 years ago on September 8th, 1978. Furthermore, it was the first city in the World that had this honor. Why is this city so extraordinary? Quito, that was founded in 1534 on the ruins of an Inca city, has the best-preserved colonial downtown in Latin America. It is located in the heart of the Andes and has a lot of monuments worth to be visited. So, if you are an art lover, you should include this marvelous city in your trip to Ecuador.

Why did UNESCO decide to recognise Quito as a World Heritage?

Paraphrasing UNESCO, Quito is a World Heritage because the city represents an harmonic mix between nature, history and modernism. A great sample of that are Baroque monuments that are still well conserved as part of the incalculable legacy of the famous “Quito School of Art”. The historic and artistic value of the city San Francisco Abbey, San Agustín and Santo Domingo, or the Church of Jesuits, as well as the Guapulo Sanctuary are samples of the ancient art that preserves Quito. Quitena School is a Baroque fusion of Spanish, Flemish, Moorish and Italian art. These monuments are valuable as architectonic pieces of art, but also because of their ornaments, such as altarpieces, paintings, sculptures, etc. One of the most representative sculptures in Quito is Legarda’s Virgin, which is a 30 meter high sculpture that you can see up close if you visit El Panecillo hill. Being there is like touching the stars since there is no heaven like the One in Quito. The Jesuit Church is considered by UNESCO, the best religious architectural building in Latin America. This Baroque Church was built during the 17th Century. It has a cross latin floor and it is estimated that all the temple contains a total of 23 karats of gold. It was built for the Compañía de Jesus, one of the most important religious group inside the Catholic 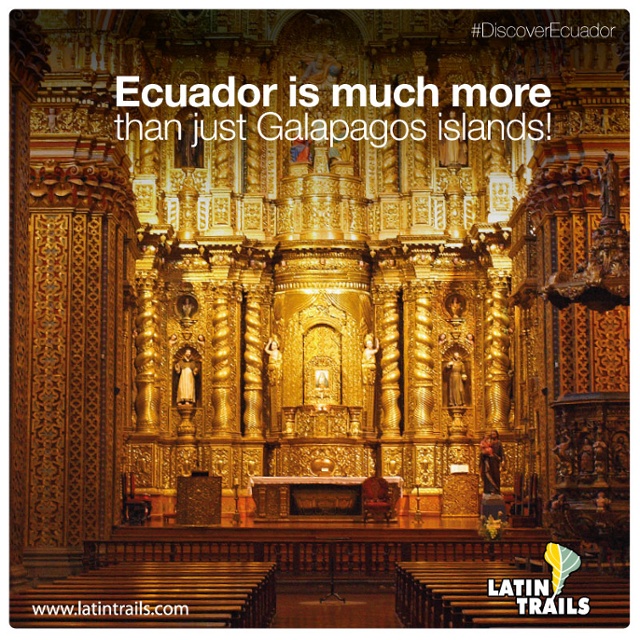 You will find several museums, churches and cultural centers to visit. Quito has also a urban plan that organizes the city and protects the historic monuments to preserve them as a legacy for thriller upcoming generations. In your trip to Quito, world heritage, you will also find natural attractions to relax and enjoy. The city has plenty of wonderful parks, such as the Metropolitan Park. Moreover, the ecuadorian capital is surrounded by attractive natural landscapes such as “El Bosque Nublado”, as well as some lakes and mountains. Haven’t you get enough of Quito yet? You can still enjoy other things of this world heritage:

Quito is on celebration for the 38th Anniversary of Quito as World Heritage but Cuenca is another ecuadorian city recognised by UNESCO as a world heritage, and it is also worth to be visited. – Do you need a destination management company for Ecuador or Peru? Contact us here and we will contact you as soon as possible.