For millions of years, hammerhead baby sharks have grown up in a nursery protected by lush mangroves and reefs on the Ecuadorian islands of Galápagos, safe from human threat. But until November, biologists hadn’t have discovered their hiding place, in what could be one of the last secrets revealed in this archipelago located 1,000 km west of the continent.

“It was by chance that we found this natural nursery for hammerhead sharks (Sphyrna lewini), a highly threatened species. It is a unique area, of great interest for conservation”, explains the biologist Eduardo Espinoza, who is responsible for the monitoring of Marine Ecosystems of the Galápagos National Park.

Still impressed by their discovery, Espinoza and his team return by boat to the place, located northwest of the island of Santa Cruz (one of the main islands), in a new expedition to collect data and place acoustic marks on the small sharks for their subsequent tracking. 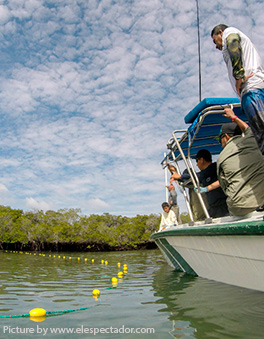 After plowing through turquoise waters crossed by sea turtles and skirting white sand beaches with black sun-tanned iguanas and overhung by huge pelicans, the small boat enters a winding canal between mangroves that flows into a natural bedrock and little deep.

Perfectly visible, dozens of small sharks with silvery complexion and crushed snout -with one eye at each end- glide meekly among other fish in search of crustaceans, the food of their early years.

“The females come to give birth and leave. The offspring have food availability here and are protected, because the reefs prevent large predators from entering, “explains Espinoza before launching an extensive network.

After one or two years, when they have grown and need more food, they swim into open waters, and sometimes they migrate thousands of kilometers, already turned into bulky masses of up to three and a half meters that can get to live 50 years. 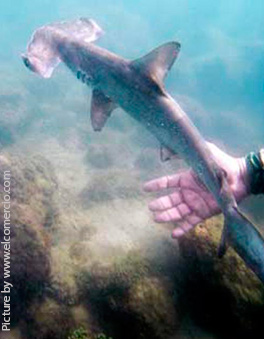 The Galapagos Park has been monitoring breeding sites for years and has been “tagging” hundreds of sharks, a sacred species in this marine reserve of 138,000 km2 – the second largest in the world – declared a Natural World Heritage Site.

But the finding of these small hammerheads is particularly sensitive, because due to overfishing and illegal capture the species is in danger of extinction, barely two levels away of being considered extinct, according to the International Union for Conservation of Nature (IUCN).

Something that makes the operation of marking even more delicate. “Shark, there, to the right!” shouts one of the team members. At that moment, everything becomes frantic.

The captain brings the boat closer to the mesh. One of the assistants grabs the shark, of half a meter, and places it on a table so that Espinoza and the rest of the team can measure it, weigh it, determine the sex and implant the chip on the back that will serve to know their habits and their migration route.

Are you thinking about traveling
to Galápagos?
Do you have some question? we are here to help you 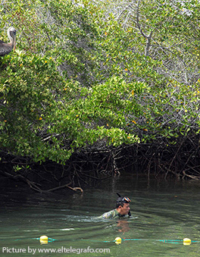 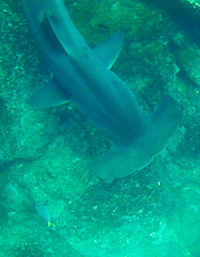 After placing it back to the water, they revive it by moving it by the head and tail until it slides by itself.

“They can’t be outside water for more than two minutes because they need a constant flow of water so they don’t die. It’s like a Formula 1 pit stop”, explains the biologist.

To save the hammerhead shark, also threatened by its slow growth and low reproductive capacity, Ecuador created in March 2016 an extra protection, a sanctuary of 38 000 km2 with total closure of any type of fishing, north of the archipelago between the Darwin and Wolf islands, the area with the highest biomass of sharks in the world.

According to José Marín, biologist at the Charles Darwin Foundation, an international scientific research NGO, Ecuador is making “a titanic effort” in the conservation of sharks, whose fins are highly valued in some Asian countries’ cuisine.

“These studies, sometimes with the help of satellite tracking, can alert us about the place where these sharks are being caught when they leave the marine reserve and let us inform other countries so that we can all protect them even more”, he explains to AFP.

In August, a Chinese-flagged vessel was captured in the Galápagos marine reserve with 300 tons of fishing, which included specimens of this species.

The Ecuadorian justice, which foresees very severe penalties for environmental crimes, sentenced the captain and his crew to three years in prison and fined the owners of the ship with USD 6 million.

If you are thinking about traveling to the Galapagos Islands, you should read post What is the best itinerary in Galapagos?