Galapagos Islands are famous, not only as a paradise for naturalists, but also as a source of inspiration during History. The Islands inspired poets, explorers, scientists and dreamers. They inspired, for instance, the writer Daniel Defoe with his novel Robinson Crusoe, and they also boosted scientific progress, as Charles Darwin was amazed by the Enchanted Islands, which inspired his famous Evolution Theory.

Charles Robert Darwin arrived to the Galapagos Islands in 1831 on board of the Beagle. During this historic voyage, Darwin visited Cabo Verde, Rio de Janeiro, Chile, Peru, Tahiti and other places. Everything is collected in Journal and Remarks,  the book he wrote in 1839. In chapter 19, he explains his expedition at Galapagos Archipelago.

The most interesting fact is that when Charles Darwin began his trip, he expected to reinforce the idea of creationism. In Darwin’s time, most scientists fully believed that each organism and each adaptation was the work of the Creator, God. In fact, during this first voyage, his conclusions were connected with these expectations.

Charles Darwin, the Journal of Researches

He wrote the Journal of Researches into the Natural History and Geology of the countries visited during the voyage of H.M.S. Beagle round the world. In the first edition he claimed that Galapagos wildlife was very similar to what he had found on the South American continent. In later editions, his point of view had changed, which was the seed of his theory of evolutionism.

Most people don’t know the real reason why Darwin was inspired by Galapagos Islands. It is not just the biodiversity of the Islands what made them develop the theory of evolutionism, but a particular fact that happens in the Enchanted Islands. There are more than 18 different islands in the Archipelago, and the curious thing that amazed him was that there were species that varied from island to island, such as the different types of finches that could be found there. It inspired the idea of natural selection. 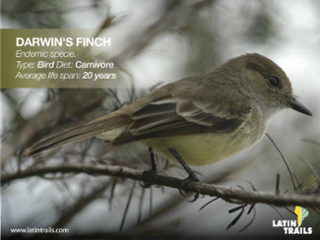 Natural selection, as Darwin explained, means that species suffer variations if it is useful for their circumstances, as the most adapted survive. “As natural selection acts by competition for resources, it adapts the inhabitants of each country only in relation to the degree of perfection of their associates” (Charles Darwin on The origin of Species). In other words, the same finch that lives in an island and another, evolves differently according to the surrounding.