Visit the snow-capped volcanoes, the highest active in the world, taste the traditional cuisine, sense the andean culture, travel in one of the most difficult trains of the world. And, last but not least, visit two of the most beautiful colonial cities in the country, Quito. 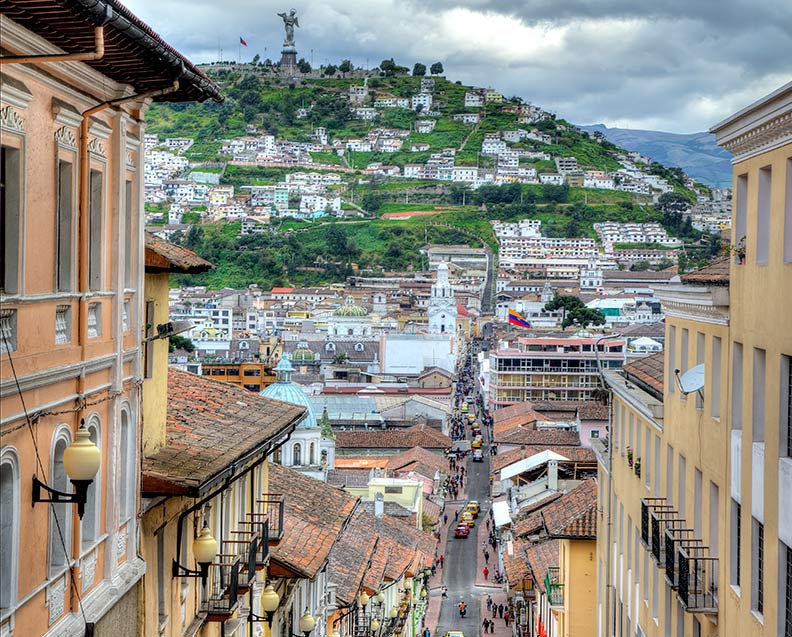 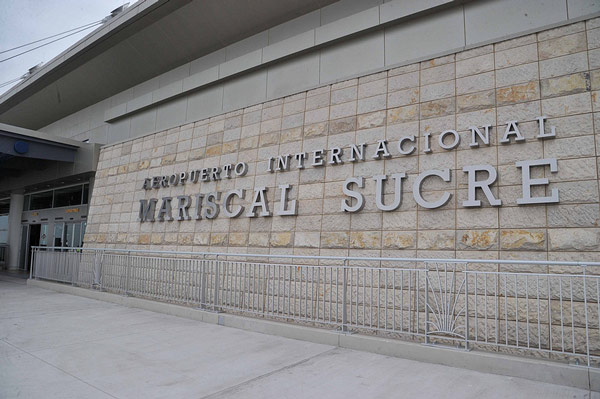 After the arriving at the airport, our helpful guide will meet you, plus he will serve as a translator, and assist with the private transfer to your hotel. 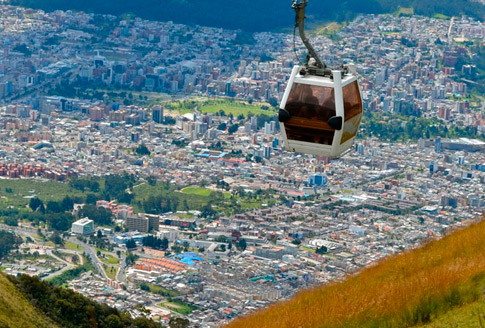 Early in the morning, the tour will depart by car towards the “Teleferico” which is the highest viewpoint in the city. Y

Around midday, you will go to the “Mitad del Mundo”, a monument to remember the equator line that passes through our country.

You may choose to either visit the Ethnographic or the Inti Ñan Museums, both located near the monument.  Along the way, we will stop for a traditional Ecuadorian lunch (optional and not included). After the tour, you will finally return to your hotel. 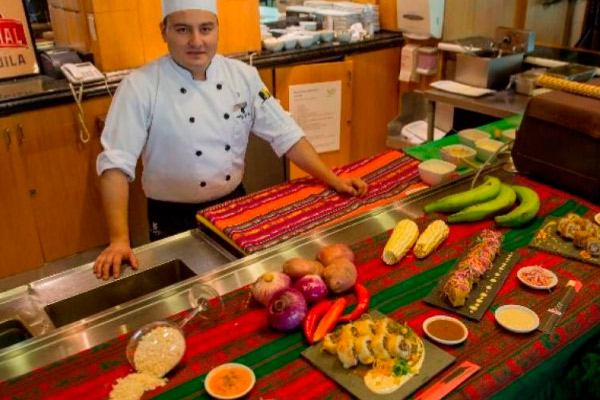 Six Senses Tour Quito is an unique and innovative program made up by psycho-sensory experiences in which every perceptive human sense is involved. The Six Senses Tour was born as an innovative experience program by Latin Trails, which Psychology and sensitive methods are combined; giving to our guests a complete life experience on ancient places and typical meals in the marvelous City of Quito. Enjoy a city tour of Quito the first city tour in Quito to offers more than just postcard pictures in your mind. You can check out the options in Quito Six Senses Tour

Day 4: Cotopaxi, the highest active volcano in the world 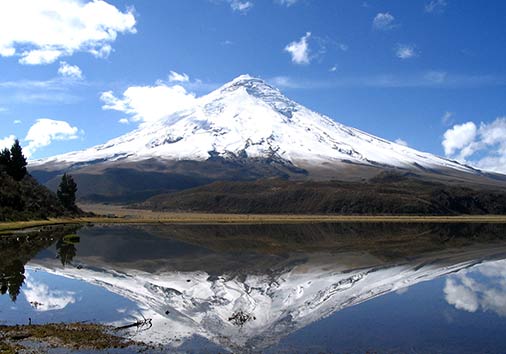 After an early morning breakfast, depart towards the Cotopaxi National Park. The Cotopaxi Volcano is one of the most important landmarks in Ecuador as it is the highest active volcano in the world. Lush endemic flora and fauna of the area can be observed, including one of the most representative species is the Chuquiragua (also known as the mountaineer’s flower) wild horses, deer, llamas, and more. Whilst in the National Park one can also visit Limpiopungo Lake, located near Rumiñahui volcano (4757 meters), or hike. After this experience, you will go to a “hacienda” a colonial Andean rich farm, where you will overnight.

Day 5: Baños, the door of the Amazon

It is time to travel to Baños, a natural gateway to, adventure and peace. Visit the town, do some adventure trips, visit waterfalls and of course, enjoy the bohemian yet calm nightlife.

Day 6: Introduce yourself to Chimborazo Volcano 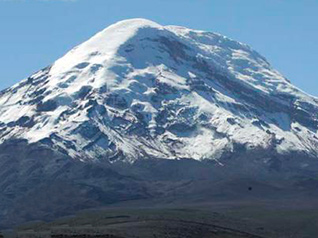 In the morning we will travel to Riobamba, where you will pass by Chimborazo to enjoy the landscape, nature as well as the environment.  Once you arrive in Riobamba, you will visit the museums and then go around the city. One must remember that Our Six Senses tour can also be implemented in this route!

Day 7: The most difficult train route in the world 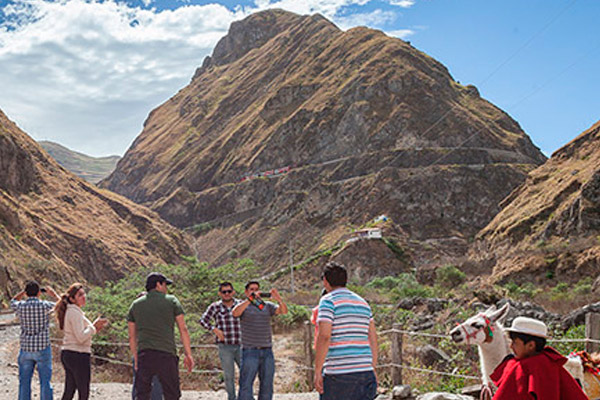 After breakfast, we will depart to Alausi for a ride on the Devils Nose Train which is the most famous in Ecuador. Plus, it is known as the “most difficult railway in the world” due to the problems in constructing the railway line through the rough terrain of the Andes, the construction ran into a problem when it hit the vertical rock known as the ”Nariz del Diablo”.  They got around the problem by carving zig zag out of the rock allowing the train to climb the ascent.

The train, once used by the public was closed due to financial difficulties. It was recently re-opened as a tourist service that offers spectacular views of the Ecuadorian landscape.  On clear days, you will be lucky to see Chimborazo volcano.

After the train ride, we will visit Ingapirca.  These ruins are the most important architectural legacy of the Incas in Ecuador, dating back to the 15th century they are a significant part of Ecuador’s pre-hispanic legacy.  They are located in the province of Cañar, about an hour and 45 minutes from Cuenca.  You will be taken to a guided tour.  The vast archeological complex includes a roofless fortification, courtyards, terraces, temples, houses and a ´castle’ possibly the Temple of the Sun.

After the tour we will then head to the historical city, and probably prettiest city, Cuenca. 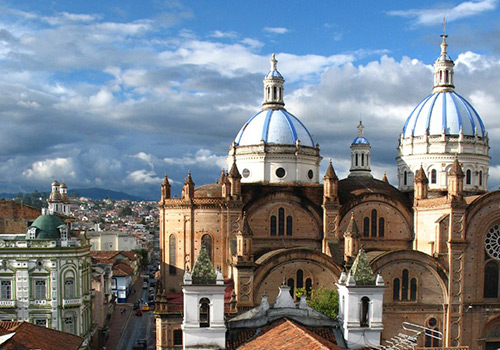 Cuenca is Ecuador’s third largest city; it retains its pleasant provincial air. Its red tiled roofs, cobblestone streets, flowery plazas and museums make it very special and many consider the city the most beautiful in all of Ecuador. Today we will enjoy a full day city tour to discover, at a leisurely pace, the beauty and charm for which Cuenca is been recognized as a World Cultural Heritage Site. This is a walking tour in the colonial downtown area of Cuenca, you will have the opportunity to enjoy the warmth and hospitality of its people, the colourful parks and plazas, religious monuments and handcraft shops, plus an explanation of Cuenca’s history. 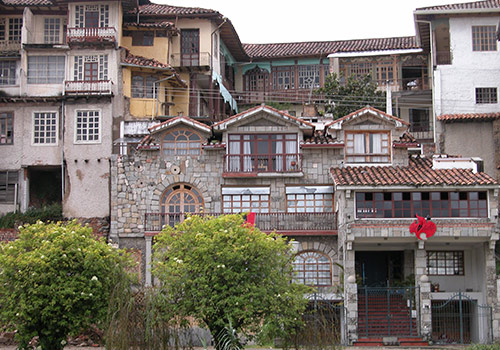 This day you will fight to Quito, so depending on your flight departure time, the longer you stay then the more experiences we will arrange for you.

The journey is over, we thank you for choosing our services and trusting in our long lasting experience.